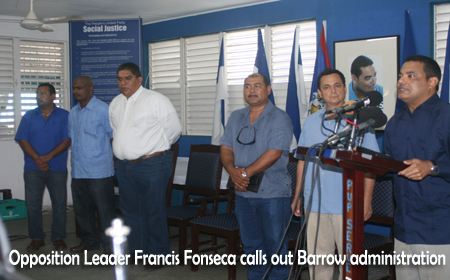 BELIZE CITY–Since last Thursday when Prime Minister Dean Barrow gave his blessings to the formalization of a new association/s to replace the Belize Sugar Cane Farmers Association (BSCFA) – a 55-year old institution that acts as the voice of over 5,300 sugarcane growers in northern Belize – as a means of breaking a protracted standoff between the association and the millers, Belize Sugar Industries (BSI) and its parent company, American Sugar Refineries (ASR), certain sectors of society have urged the cañeros to remain united at this existential crossroads, and have even regarded the PM’s statements as a plot to “divide and conquer” the beleaguered association.

Today, the Opposition People’s United Party (PUP) weighed in on the volatile situation via a press conference at their Independence Hall headquarters in Belize City, where they joined the choir of advocators who have pledged their unwavering support for the unification of both the association and its general membership.

In the presence of four of its representatives from the North, along with Lake Independence standard bearer, Cordel Hyde, Leader of the Opposition, Hon. Francis Fonseca – who stressed that the party has not jumped into the fray for the purposes of political exploitation – described the sugar industry as “the lifeblood of the North”, and reminded the audience of the critical role that the tripartite entities – the Government, the farmers, and factory owners – play in ensuring the continued survival and success of the industry, then censured the PM for apparently taking sides in the long-running dispute.

He said, “Our party condemns in the strongest possible manner, the decision by PM Barrow and his UDP Government to destroy its long-established partnership in the industry. Barrow and the UDP have abandoned the cañeros and the Belizean peoples’ interest, and have decidedly sided with multinational ASR, just as the UDP abandoned the Mayan people in favor of US Capital in the south.”

Fonseca contended that the intention of Government was to simply negotiate a deal with the stakeholders, no matter how unfair the deal is, adding that the “one-sided” agreement is being “forced” upon the powerless farmers, who, he outlined, work as partners, and not employees of BSI/ASR.

“What does ASR have over the Government?” he questioned, noting that everyone wants the crop to start, but that GOB is attempting to “undermine” the farmers and their association by supporting large grower groups in their decision to sidestep the association.

“We in the PUP stand 100% proudly and strongly with our cane farmers”, Fonseca declared, as he emphasized that the party has tried to steer clear of the ongoing debacle, but decided to step in when some of the cañeros/”radicals” who were agitating for a better compromise agreement were accused of playing politics.

While making it clear that his party welcomes foreign investors to Belize, Fonseca declared, “if ASR cannot value and respect our cane farmers, then let them [shutter their doors] and go!”

PUP Orange Walk South standard bearer, Hon. Jose Mai, who is also a cane farmer and member of the BSCFA, said that the most recent shift in the impasse was the result of “calculated political manipulation and willful collaboration” on the part of GOB and the agents of ASR.

Mai indicated that he and other farmers from his branch have made up their minds to sign the new proposed commercial agreement “under protest,” since their backs have been put against the proverbial wall, and their association is now facing an imminent breakup which, he asserted, was orchestrated by the Government.

The PUP were not the only ones who responded to comments made by the Prime Minister during his GOB press conference last Thursday, since attorney Audrey Matura-Shepherd also issued a release last Friday, January 9, regarding the constitutionality of the BSCFA.

In referring to the current legal battle in which her client, Lucilo Teck, and others from the BSCFA sought permission from the court to have GoB’s Sugar Industry Control Board (SICB) declare the crop season open regardless of the non-signing of an agreement, Matura-Shepherd’s release stated that “It seems intentional…that the Prime Minister, Hon. Dean O. Barrow, tried to make it appear as if though there is a court decision that declares the Sugar Industry Act No. 27 of 2003 unconstitutional in parts, and to the extent that it will affect the case of Lucilo Teck v Sugar Industry Control Board and BSI claim no. 739 of 2014; this is far from the truth….”

It noted that on June 8, 2010, a claim was indeed brought against GOB, after which it promised to repeal sections of the Sugar Industry Act in accordance with an order of the court at the time, but according to the release, GOB has failed to go to Parliament to pass the promised amendments, especially since there was no ruling handed down by the courts, but rather, an order following the out-of-court settlement between the parties to have specified sections of the Act be amended, but to date, there have been no amendments nor has the claimant, United Cane Farmers Association (an organization which had sought a ruling in favor of separation from the BSCFA), or their attorney, Hubert Elrington, pursued the matter against Government before the courts.