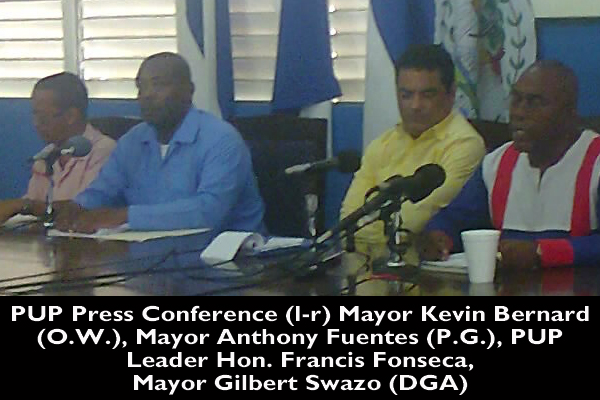 The Independence Hall on Queen Street in Belize City was today the venue for yet another press conference staged by the Opposition PUP; however, this time around, the topic was chiefly concentrated on the present United Democratic Party (UDP) administration’s “unfair” distribution of subventions to the municipalities which are currently run by mayors who represent the Opposition People’s United Party (PUP).

The three mayors – Anthony Fuentes, mayor of Punta Gorda Town; Kevin Bernard, mayor of Orange Walk Town; and Gilbert Swazo (Ret’d Major), mayor of Dangriga Town, who sat at the head table along with their Party Leader, Hon. Francis Fonseca, claimed that not only are their town councils unable to function effectively with the monthly funds that they presently receive from central government, but they are also being left out of the decision-making process as it relates to the allocation of the monies which will be disbursed by Government for proposed infrastructural works which are soon to be conducted across the country.

Opposition Leader Francis Fonseca demanded respect and “fair and equitable” treatment, which, he said, both the mayors and the people who live in those municipalities are not getting. He accused the Prime Minister of placing the interests and authority of his (the PM’s) caretakers above the interests of the municipalities.

Fonseca said, “The proper thing would have been to have those monies made available to the town council, [since] they are the duly elected town council; pass the monies to them, [so that] they [could] then determine how those monies are spent, [and so] they [could] employ the contractors, but that is not the case.”

Their displeasure stems from a Government program that was first announced by PM Barrow at a press conference that was held on November 27. During that conference, the PM stated that the upcoming infrastructure works program will involve the carrying out of much-needed upgrades of the major streets and roads that are in grave disrepair in the towns and cities nationwide.

As part of the project, $350,000 has been allotted for street repairs in Punta Gorda Town, while $500,000 will be set aside for municipal upgrades in Dangriga Town.

After making the declaration, the Prime Minister later contacted the respective mayors to notify them of the projected works programs, which will be carried out by CISCO Construction, since the company is currently conducting works in the southern districts.

During their respective conversations with the Prime Minister, both mayors noted that they were told that the UDP caretaker in their town would determine 90% of the labor force that would be gainfully employed in the programs, and that their (the mayors’) input would be merely to consult with the contractors on what streets need to be paved most urgently.

The mayors will have no authority or influence over the relevant funds or contracts that will be awarded.

Today, the mayors spoke out against the plan. Mayor Gilbert Swazo said that after he complained that the $87,000 that was initially allocated for Dangriga is a mere pittance in the face of damages that have been caused by recent weather conditions which, he claimed, amount to about $325,000; the Prime Minister opted to boost the allotment, but under certain stipulations.

Swazo said, “The Prime Minister spoke to me and said that Dangriga will be allocated $500,000 for street works. However, though, there are conditions; one of the conditions that the Prime Minister stated to me in the phone conversation, was that he, as the Prime Minister, will select the contractor, who he said will be CISCO Construction. He also stated that he will select an executive outside of the town council, his man as he said, to oversee the street works and to employ his people; indicating – in my humble view – UDP members and associates to be the workforce. This executive, he said, will be [led by] his man, “Pawpa” Mena; [and] the work force, as I indicated earlier, will be his people because, as he said, it is his government’s money. And, he also stated, that the priority of selecting the streets and how the work will be conducted will be the privilege given to the Mayor and the Council. In my humble opinion, all this is an insult to the people of Dangriga.”

“We are witnessing a leader who [has] spent too much time and effort focusing on the next election, and not on the next generation”, Swazo said.

Punta Gorda’s Mayor, Anthony Fuentes, shared similar concerns. He said, “On Wednesday, December 4, the Prime Minister called me, indicating that he will be spending $350,000 – and he might raise it to $400,000 – for the rehabilitation of streets in Punta Gorda Town. He also mentioned that because CISCO is already doing work in the Toledo District, they will be the one to get the contract to do the street work in Punta Gorda Town. Of course, he mentioned that because it is a government project, his person, his caretaker, Eden Martinez, will be the person to get the rest of the employees. That means that the Punta Gorda Town Council – like the Dangriga Town Council – has been disrespected as the duly elected body in Punta Gorda Town, because if they get 50 individuals to work, the town council will only employ 5 persons and the unelected person will get to name 45 employees. It’s politicking, it’s wrong for Belize.”

While those two mayors are not happy with the way in which the monies will be disbursed, the Orange Walk Mayor, Kevin Bernard, who did not get an official call from the Prime Minister’s office because the works in his municipality will be done through the Ministry of Works – though grateful – also condemned the method in which the infrastructural projects are being handled.

Bernard said, “The Orange Walk Town Council has not received any call or whatsoever from the Prime Minister. All we have is information being provided to us by the local ministry representative in Orange Walk, but that is not official information; they are just saying that certain works will be done on the road. Other than the Prime Minister calling us, we have not received any official word from his office nor from the Ministry of Finance.”

“While we are grateful for any infrastructural work which will bring any measure of relief to residents anywhere, we are concerned about the allocation of monies and the prioritization of damages. For example, we look at monies to be disbursed for immediate remedial work — 2.269 million [dollars], and can’t help but notice that the 3 municipalities administered by the Opposition are each receiving much less than a quarter of the allocation to the other [mayors]; this is total nonsense. This is a red flag, and in our opinion, cause for concern,” Bernard went on to say.

Bernard further stated, “I am deeply concerned because I understand that in the wider scope of infrastructure works to be done in the medium term – some 78 million dollars worth – Orange Walk is only getting 2.9 million dollars, whereby portions of that money will be used to pave a portion of the main road passing through our town. And that portion of the road is the responsibility of the government, anyway.

“Millions of dollars have been allocated to Belize City where that council is already the recipient of additional subventions from Government, a head tax from tourism revenues and a municipal bond. All we’re asking is for government to be serious in its commitment to residents all over this country. We [therefore] ask the Prime Minister to commission a true assessment of required infrastructural work, not one done through the so-called caretakers where political agendas will hold sway. For there to be any meaning[ful] development, political game-playing must be pushed aside.”

According to PM Barrow, the road repair works in Orange Walk are slated to be done under the authority of the Ministry of Works, who will be soon requesting bids for the parts of that municipality that will be fixed, namely, the section of the Philip Goldson Highway, and the section of the San Antonio Road that run through the town. Those particular contracts are estimated to cover the expending of about three million dollars, hence the reason for the invitation of tenders. Mayor Bernard mentioned that while these two main thoroughfares are being fixed, there are many other streets in Orange Walk that are in dire need of repair.

Hon. Francis Fonseca argued that the “disrespect” of the mayors’ authorities and responsibilities is not right. He stated, “These are the duly elected Mayors of those municipalities. If the government is serious about helping these municipalities, then the Prime Minister should say ‘I have funds available for Dangriga; I have these funds available for Punta Gorda; I have these funds available for Orange Walk’, and pass those on as the normal process requires. Pass those through local government or through the Ministry of Finance directly and have them, as they are elected to do, determine what works need to be done. Why is there a need for this layer of UDP to be put on top of these elected leaders to determine [that] they have to agree on what works should be done, they have to agree on who will get the contract, they have to agree on who will actually be employed; why is that necessary?”

All three mayors and their Party Leader – as stated earlier – are of the opinion that although the government program seems generous enough, the monies that were apportioned to their municipalities are “woefully inadequate.”