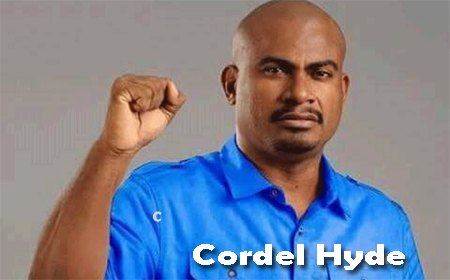 BELIZE CITY, Tues. Feb. 23, 2016–Four-time Lake Independence area representative, Cordel Hyde, who recently ran in the leadership convention for the Opposition People’s United Party (PUP), will be offered a “meaningful” post on the party’s executive, according to the recently installed Leader of the Opposition, Hon. Johnny Briceño. It has been reported that Hyde would be offered a post as a senior deputy to Briceño; but Hyde told us today that it is premature for him to comment at this time, since “these things tend to be fluid.”

According to Hyde, PUP officials have been having internal discussions, but “it is one thing to have a discussion and another thing to get it done,” he said. “John is the new leader, so he should have an amount of flexibility to get things done and shaping things the way he wants,” Hyde said.

When we spoke with Briceño on the matter, and specifically reports of Hyde’s being made a senior deputy, Briceño said, “They seem to know more than I do…”

He confirmed that he had been meeting with Cordel Hyde, since “…we want to find a meaningful way to get him involved in the party.” Briceño added that, “I’ve been saying it over and over, that he has a role in the rebuilding of the party, and to be able to connect with the Belizean people, especially at the grassroots level.”

So what are the options that could be offered to Hyde? “There is definitely no discussion about a senior national deputy,” Briceño said, but added that Hyde’s post “has to be at a senior position.”

As we understand it, most of the major executive posts, if not all, are occupied. So, would this mean that a position would have to be created for Hyde?

“Quite likely,” Briceño told us.

“We would have to create a meaningful post that is going to show to the Belizean electorate that he has a meaningful role in the party. We don’t just want him for decoration,” Briceño told us.

The matter should be raised at a PUP executive meeting planned for tomorrow. He said that they have also asked the PUP’s national campaign manager to come up with a plan for the upcoming village council elections, which Briceño said, ought not to be politicized.

“I personally believe that we have to keep politics at a minimum in these small communities. It divides us more; but as a party, we know the reality on the ground. Certain villages are important to the party, and former standard bearers and present area representatives, and we need to put a team in those villages,” Briceño added.

He said, though, that in other areas where people are prepared to run on independent slates and where the PUP leaders have determined after dialogue that they can work with them, then it makes sense to support an independent slate, said Briceño, adding that this would be his personal preference.

The PUP may be better off saving its resources for the bigger races. When we suggested this to Briceño, he agreed. “We don’t have resources, we need to get resources…” said Briceno. “I need to make the point that winning the village council elections has no bearing on whether [a party] will win the next general election. What are we going to be fighting with one another for?” he questioned.

He told us that a couple other posts also need to be looked at, such as the party’s national campaign manager and deputy communication officers.

“More than anything,” he said, “the plan is, within the next 100 days, to visit all 31 executives, starting tonight in Corozal.” Over the weekend, they travel to the Stann Creek and Toledo Districts.

The plan is also to reorganize the local executive, strengthen the secretariat and rebrand the party.

The new National Communications Director, Anthony Mahler, is already working with a group to look at the PUP’s media outlets – Vibes Radio, Vibes TV, and Belize Times – as well as to chart the ways in which old and new media will be used and merged.