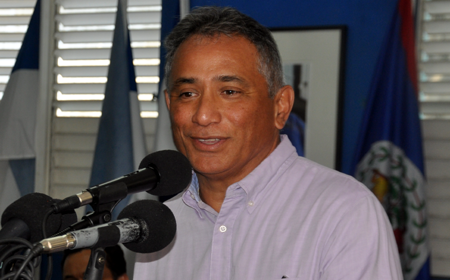 BELIZE CITY, Wed. Apr. 13, 2016–On the night of January 31, 2016, almost 2,800 loyal supporters of the People’s United Party voted Hon. John Briceño, area representative of the Orange Walk Central constituency, leader of the Opposition PUP for a second time. Briceno, who was leader from 2008 to late 2011 when he stepped down, easily defeated former leader Francis Fonseca and four-time Lake Independence area representative Cordel Hyde.

Fonseca had stepped down from his post as PUP party leader just a day after leading his party to a second consecutive general election defeat in November of 2015. But a few weeks later, just a few days shy of the nomination day set for the leadership convention, Fonseca announced that he was reversing his decision at the behest of some of his loyal standard-bearers.

The November election defeat was the fourth major election defeat in 2015 for the People’s United Party, capping arguably one of the rockiest years for a party leader. The PUP were badly defeated in two bye-elections (in January and July) and in the March municipal elections.  The July defeat in the Dangriga bye-elections would trigger the grouping of 11 PUP standard-bearers in what some in the media dubbed the G-11. That group included both Briceno and Hyde, who argued that Fonseca was violating the party’s constitution by not having a National Convention in almost 5 years while the Constitution mandated that one be held every two years on a date in November.

All that history aside, Briceno held his first National Executive meeting on February 25, 2016, and at that meeting he secured the approval to make necessary changes to the structure and face of the National Executive, including finding a senior position for Hyde, who had not been a PUP executive member since November of 2011 when he was removed as a Senior Deputy Leader by Fonseca, three weeks after he had become leader. Back then, Fonseca had similarly received authority to revamp the National Executive to his liking.

Briceno took a little over a month to make decisions about the changes he felt were needed, and last Wednesday, April 6, he revealed his changes to the National Executive at Independence Hall: Hon. Hyde would be made Deputy Leader to Briceno; Lead Opposition Senator Eamon Courtenay was tabbed National Strategic Development Manager; attorney Andrew Marshalleck replaced former Senator Anthony Sylvestre as the party’s Legal Advisor; and attorney Chris Coye was introduced as Treasurer, replacing businessman and Orange Walk North standard-bearer, Ramon “Monchi” Cervantes.

Long-time Briceno loyalists Narda Garcia and Zoe Zetina from Belmopan were appointed co-chairs of Policy and Reform; while Senator Paul Thompson was assigned to be Liaison for Civil Society and Social Partners; and veteran party stalwart Bill Lindo was brought in as Research and Development Coordinator. Linsford Castillo was named the party’s new Secretary General.

Briceno also announced at the meeting that the previous night, Tuesday, Victor Espat had stepped down as National Campaign Manager, leaving a void that would be filled at a later date.

Our reports are that all went well at the meeting, save for replacing Cervantes, who requested time to consult with his constituency committee. Well, the following day, Thursday April 7, Cervantes’ Orange Walk North committee penned a blistering letter to the PUP Party Chairman, Henry Charles Usher, registering its outright displeasure and dissent with the replacement of Cervantes, adding “we view this as an egregious breach of our constitution and as a blatant act of disrespect to the people of Orange Walk North…”  They insist that “if the removal of Cervantes is so desired, that it should be done constitutionally and respectfully.”

We spoke with the Hon. Briceño on Monday, and he explained that Cervantes was asked several times by the Party Chairman and himself to develop and present a budget which is needed to operate the party. Briceno contends that Cervantes had failed to do so.

According to Cervantes, who is considered a Fonseca loyalist, such requests were never made of him, and in an interview with Amandala today, he affirmed that he is the legally elected Treasurer of the PUP’s National Executive until further notice.

He also remarked that the Party Leader was only given the power to fill vacant positions and create new positions in the National Executive and not to oust those who were constitutionally elected by the National Convention.

However, according to Usher, in keeping with the party’s Constitution, he will move to have the newly proposed National Executive ratified and accepted at a National Party Council meeting scheduled for May 7, 2016.