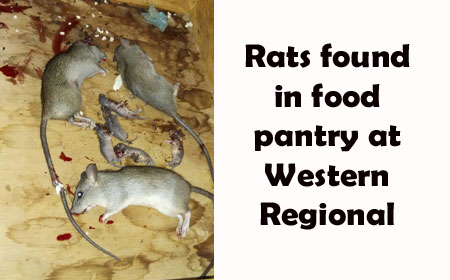 BELMOPAN, Mon. Apr. 27, 2015–Administrators at the Western Regional Hospital in Belmopan told the media today that measures have been put in place to manage a case of rat infestation that was recently uncovered in the hospital’s food pantry where groceries and food stuff for staff and patients are stored.

The situation came to light last Friday, April 24, when the area was being cleaned out, and pictures that were taken at the time showed that there were multiple dead rats of all sizes and even a used condom inside the dilapidated room, amongst closed barrels containing flour, rice, beans and other food supplies.

Hospital administrator Bernadette Sewer explained to the media today, that the situation came to light because recently, there has been a more “in-depth” cleaning of the hospital, since there was no house cleaning supervisor for some time.

She said, “About a week ago, we found some rat droppings in the food pantry area, and that is when we realized that we had a problem. We brought in the public health inspectors, the infection control nurse, and started to address the issue from a team approach. We put in some measures by fixing certain areas in the food pantry and realized that we still had the problem, and decided that we have to look a little deeper.” 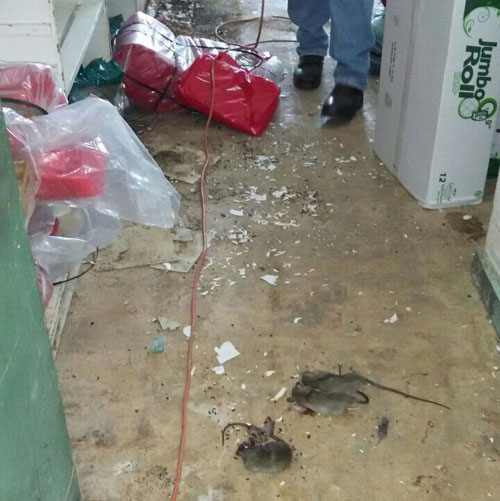 “That’s when we pulled out all the cupboards and discovered that we had a rat infestation there. We pulled everything out of the storeroom, we condemned what needed to be condemned, and we are now looking forward to focusing more on this area so that we don’t have a repeat of this incident,” she further explained.

Regional Manager of the Western Health Region, Melinda Guerra, admitted that there was a breakdown as it relates to infection control measures at the hospital, but was unwilling to point fingers.

“You see, the persons who are supposed to be carrying out, their diligent duties here, were not doing it, so we just have to admit and be honest to the public that it was not being done. However, it is a learning lesson not only for us, but for the entire public – to see that when you have a rat problem, you have to be on top of things,” she noted.

Guerra went on to assure the public that hospital officials are “doing the best they can” to deal with the matter.

“We took an inspection probably like a month ago, and we identified that there were some rats coming in, and from that time to now, we have the inspector inspecting the place, but as I said before, definitely they slipped down on their supervision. As soon as we identified the problem, I had my public health inspector write a report. Already, they are fumigating the place, setting traps in place, and closing the holes. They have closed the holes in the sides and the ceiling, so we are doing the best that we can,” Guerra told reporters.

So whose responsibility was it to ensure that such conditions did not exist in the first instance?

“Certainly I won’t issue blame to anybody else, but as hospital administrator, I take full responsibility for it. We know we have weaknesses all around, and we hope that the Ministry [of Health] will continue to support us in closing these gaps so that it doesn’t happen again,” Sewer mentioned.

So, while Sewer took full responsibility as the hospital administrator, will any heads roll for the blatant dereliction of duties?

“When it comes to repercussions, I think we need to take a team approach rather than just blaming somebody right now…take the team approach and see how best to upgrade this place,” Guerra replied when pressed about those who should be held accountable. 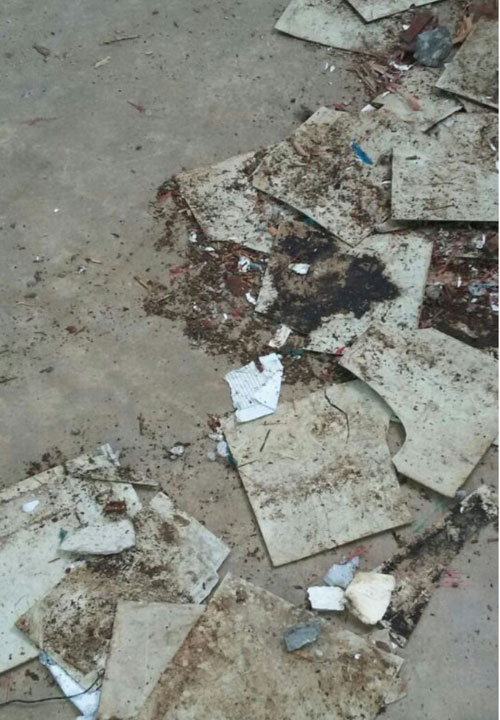 Interim Head of the Epidemiology Unit at the Ministry of Health, Dr. Marvin Manzanero, said that he was not fully aware of the situation, but said that the expectation is for a hospital to be much cleaner than a house.

He outlined the immediate health concerns that have been brought on by the situation, since the rodents transmit diseases that can be fatal to humans.

“The immediate concern would be any gastro-intestinal diseases that rats could convey. The two more serious ones if you will, salmonelosis and leptospirosis, would be our concern in terms of what rats can give humans. There are some viral hemorrhagic fevers that rats can also be vectors of, so those would be the concerns [as well],” he said.

On Friday, the Ministry of Health got involved in order to clean out the place, which contains a dysfunctional air condition unit; sagging, dirty shelves, lockers with the doors hanging on the hinges; grimy, filthy floors, and a broken window with holes.

The hospital’s kitchen is almost adjacent to the food storage facility, but Guerra and Sewer emphasized that the infestation does not extend to that area.

When the media visited the hospital today, there was nothing more than a freezer still in use inside the room, and the barrels of food stuffs had been carted outside to the corridor.

Based on a prior hospital assessment, we understand that a section of the hospital is scheduled to be upgraded and a new wing will soon be built, courtesy of a grant from the European Union.