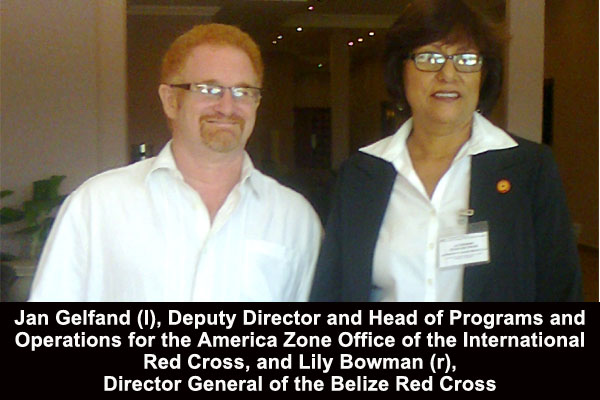 With the start of the 2014 Atlantic Basin Hurricane Season fast approaching, forty delegates representing branches of the Red Cross from the Caribbean and Latin America as well as international partner societies in the United States and Europe are currently in Belize for a three-day regional contingency planning meeting which is being held at the Ramada Belize City Princess Hotel.

The regional meeting – which is being hosted by the Belize Red Cross – is held annually prior to the hurricane season to strategically plan and produce a document that can be relayed to respective governments in preparation for hurricanes or natural disasters that may arise, and is also aimed at garnering national and international response and/or support when a disaster strikes.

The regional conference is taking place in Belize for the first time in ten years and Jan Gelfand, Deputy Director and Head of Programs and Operations for the America Zone Office of the International Red Cross, expounded on the purpose of the event and its merits.

He said, “We’ve brought together people from throughout the different national societies of the Red Cross as well as government representatives and other partners to look at how we can continuously improve our capacity to respond collectively to natural disasters, in this case, looking at contingency planning for the next hurricane season. If a hurricane or natural disaster should affect the country, the capacity of government and civil society to respond is quite limited, so we have decided to partner with others through our Red Cross system to mobilize 189 national societies in different ways, whether through financial or human resources, because there’s a whole wide range of what we can do depending on the scale and depending on whatever it is that the country needs. We will work with government in an independent way to support their capacity to respond to disasters, so we are looking at how to do that better using people, technology, and innovation.”

Gelfand also explained that this year’s meeting also is focused on integrating social media and other technological forms of communication into the contingency plans by working with different communication departments, such as cell phone providers, to make sure information is provided, validated, and disseminated in an effective and responsible way so that people receive correct information to assist with proper decision-making.

She said, “It will help all the national societies to see how we will respond as a movement. We have come together to plan so that we can all do things the same way. A contingency plan is very important for a movement whose work is responding to natural disasters and preparing our communities to be able to respond on their own as well as building resilience within our communities, so we need to be able to plan and execute together by working side-by-side with the government, NEMO [the National Emergency Management Organization] in particular. We sit on their executive committee so we plan together, share our policies, and work together as a team to go into communities to reach as many affected people as possible.”

Bowman stated that their response to natural disasters has been changing throughout the years, partly due to climate change, and because new challenges and needs emerge annually, they meet to share knowledge, develop and improve tools to ensure that the current needs of communities are met.

A total of 13 CARICOM countries were represented as well as officials from the British, American, Swedish, French and the Americas’ Zone Office Red Cross, and by the end of the workshop on Thursday, the delegates hope to have a draft of the Regional Contingency Plan which will be merged across roughly 18 participating societies in order to have one coherent way to make sure that they all know what to do if Belize or another country is in need of aid from the Red Cross.