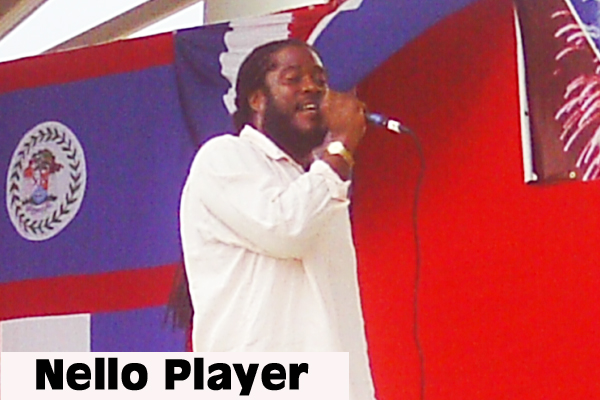 Kernelle Parks, whose stage name is “Nello Player,” is a popular Belizean singer/songwriter who has been on the music scene since he recorded his first song back in 2005. Since then, he has gained utmost respect and has produced several reggae/dancehall albums, such as Collective Insight, Best of Nello Player and others.

The prolific artist has also won the National Patriotic Song Competition for the second year in a row. He told Amandala that it’s a truly wonderful feeling for him to have won again, particularly since this is the fourth year that he has performed in the contest. At first, he said, he wanted to sit out the competition, but then he found out about the grand prize being offered by NICH – a trip to an international festival. He said, “The opportunity caused me to change my mind, so I decided that I couldn’t sit out this year; then winning the Patriotic Song Competition again was an even greater feeling.”

Nello Player told us that he did not have any idea that he was going to win, going into the competition, but he was very hopeful. Still, the artist said, he did his best and “put out a good song with the help of Ms. Edwina Logan of ‘The Remaining Band’, and the people spoke and I won for the second time.”

He explained that it is hard work for him to be able to consistently produce quality music, but said, “I’m committed to what I do, and I do my best to fulfill my obligations. I know what I want to do and how far I want to go in music. I want to leave a mark in music that Belize can be proud of, so that the country could be identified as somewhere that is able to produce good music and good artists. That’s my goal, to put Belize on the map.”

Nello Player says that he is known for creating music with lyrics that are intended to soothe the soul and touch the hearts of listeners who probe the thoughtful content of his songs.