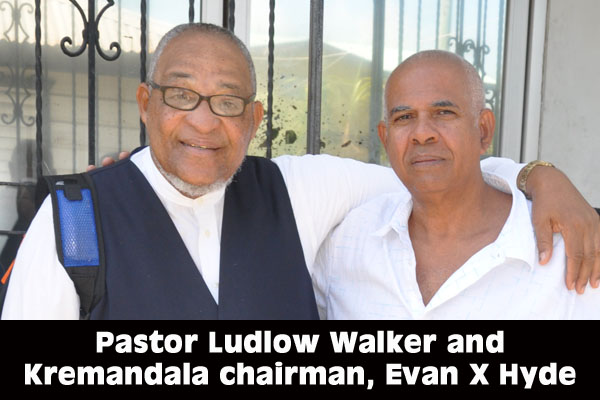 A Jamaican-born former pioneer and businessman turned evangelist who made Belize his home in the early 1970’s is presently in Belize, and decided to share the interesting story of his life’s journey and encourage individuals to follow in his footsteps.

Today, Amandala spoke to Pastor and Evangelist Ludlow Walker, 77, who travelled the world as a “Sea Pharoah” in his younger years, but came to Belize in the early 70’s and eventually built a hotel called the Mopan Travel Lodge at Mile 15 on what was then the Western Highway which was called Tropical Park.

According to Walker, it was the first efficiency apartment hotel that was built in Belize and there were a lot of business people and political officials who used to visit the location, mentioning that it is also the place where he met esteemed gentlemen such as former UBAD president Evan X Hyde and the late former PUP politician Ray Lightburn.

“On March 8, 1981, I turned my life over to Jesus Christ. I was divorced from my wife at the time and out of love for my family, I asked God to give me back my wife and 2 children with a pledge to serve him until my last day on earth. I decided to start reading the Bible after which I gave up my business and went back to the United States where my wife and 2 children were living, and that is when I realized that God has the power to do anything and everything except fail because a year and a half later, she also gave up her life to the Lord and we got remarried”, said Walker, jokingly stating that he then had 2 marriage certificates for the same lady.

He went on to say, “I am living now with my wife, and we travel all over the world and preach as evangelists in different parts of the world. I’ve been to India 12 times, I’ve been to China, Australia, all through Europe, the Americas, and the Caribbean and I continue to travel to these places to share the good news that God can do anything for you. I just want to share with everyone how God has blessed us in Belize, and I’m here again but I have come almost every year for the last 32 years.”

Walker explained that before he came to Belize, he had worked on a ship where he became a navigating officer and later met his wife, Millicent, while in New York.

They got married in December of 1961 and had 2 children, Ludlow Walker, Jr. and Dawn Walker. Dawn was born in New York, while Ludlow, Jr. was born in Belize.

Walker told us that his son is now a successful businessman in the computer world working as an independent contractor writing computer programs, while his daughter is a social worker in their home state of South Florida.

He remarked, “I just want to share with everybody that I love Belize because it is my home away from home, and I will tell you like it is, only Heaven might be more beautiful than Belize.”

In relaying his message for those who want to make a positive change in their lives or give their lives up to Jesus and are seeking a way to do so, Walker advised, “My message is simple. If we live our lives without God, there is no hope. Every day we see the sun rise in the east and set in the west – those are some of the signs that there is a God and only He can control the sun, the moon, the stars and even the weather. We know that we are not perfect, we are sinners but God loves us even in our sinful ways. All that [we] have to do is decide that you are going to live for God. In the end, if you really want to live a life of peace, joy and happiness, you have to love God and love your brethren, and when you give your life to God, He teaches you how to do that and I encourage everybody to love God and their fellowman and He will do the rest, so repent and invite God to come into your life.”

The scholarly evangelist also has a book entitled A Life Redeemed, and he told us what drove him to write the book.

“The book was very important because a lot of people asked me questions regarding what I did and why I changed my life, so it basically outlines my life story, including my early childhood in Jamaica. Those who read the book will learn all the details about what God can do for a wretched man’s life, but only if he decides to go along with God, He will do it for you, just like He did for me.”

The book can be purchased at the Pilgrim Fellowship Mission on Haynes Street in Belize City.