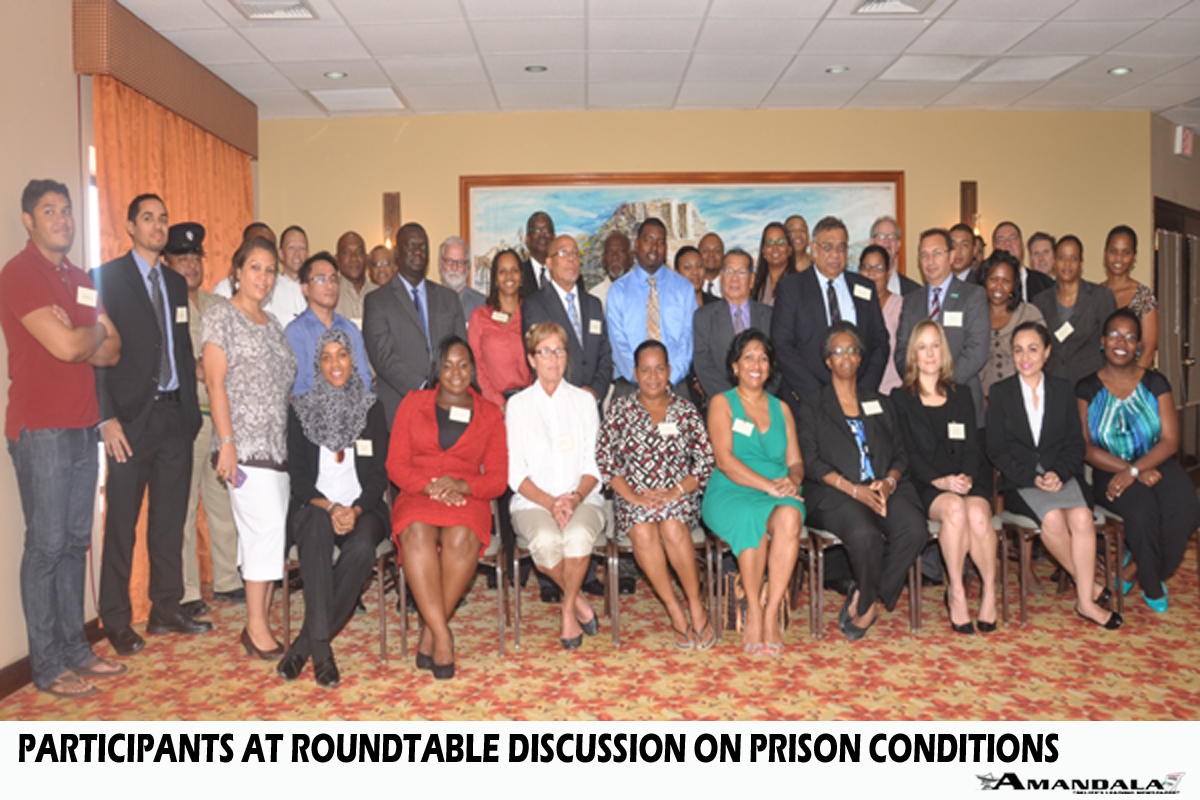 Between 40 and 50 members of the legal profession attended a roundtable discussion on conditions at the Belize Central Prison entitled “Behind The Prison Gates,” that the Bar Association held in partnership with the Death Penalty Project, a London-based NGO that has been working in Belize for the past 20 years.

Recently, the Death Penalty Project partnered with Marine Parade Chambers and were instrumental in two murder cases in Belize – the appeal of Lavern “Anti-Christ” Longsworth and the trial of Felicia Chen, whose murder charges were both reduced to manslaughter and were given sentences consistent with the sentencing guidelines for persons whose offences fall within the category of diminished responsibility under the law, due to their mental condition at the time they committed the crime.

The roundtable discussion, held on Friday, July 18, 2014, got underway after opening remarks by Eamon Courtenay, SC, President of the Bar Association of Belize; Parvais Jabbar, Co-Executive Director of the Death Penalty Project and Hon. Kenneth Benjamin, Chief Justice of Belize.

The highlight of the event centered on a report on the Belize Central Prison that was done on behalf of the Death Penalty Project by Joseph Middleton, a barrister working out of Doughty Street Chambers in the United Kingdom.

In its section on “Mentally ill inmates,” the report notes that “psychiatric services in Belize are a major problem. There is no mental hospital and there is only one inpatient facility in the country, with very limited capacity. Mental health provision is a serious issue in the prison.” The writer of the report went on to note, “At the time of my visit there had been no psychiatrist providing regular services at the prison for over a year and a half.”

Under a subheading captioned “Indefinite detention of mentally ill prisoners,” the report highlights that, “Once a person has been detained at the pleasure of Her Majesty, etc., there appear to be no rules requiring periodic review of the inmate’s mental health. Nor, it seems, are there any rules requiring periodic review of the justification for his continuing detention. I was told that no inmate in this category has ever been re-dealt with by the courts.”

“There are six inmates at the prison who are detained under the above provisions by reason of insanity or unfitness to stand trial,” said the report.

The report describes the condition of a prisoner called “Mr. M,” who has been in prison for 37 years, since 1976, when he was about 20 years-old.

“The availability of effective psychiatric care in the prison is inadequate and does not comply with international minimum standards,” the report adds.

It further commented, “The absence of periodic reviews of the justification for continued imprisonment, whether by psychiatrists or by the courts, is a stark failing in the system. It has resulted in serious breaches of the human rights of mentally ill prisoners.”

In regards to young offenders, the report records that, at the time when it was written, there were 80 inmates in the Wagner Youth Facility.

Juvenile female prisoners are held in the women’s section of the prison, with other female inmates.

According to the report, “The imposition of life sentences without minimum terms on offenders who were minors when they committed their offences is unlawful: see Bowen and Jones v Attorney General of Belize, Claim no. 214 of 2007, Judgment 27, September, 2010. In that case, the Supreme Court held that such sentences violate the prohibition of inhuman punishments in the Constitution of Belize and the UN Convention on the Rights of the Child.”

“There are two inmates at the prison who are serving life sentences for murder despite having committed their offenses when they were minors,” the report stated.

(This story will be continued in our next mid-week edition.)