Rosewood madness in Toledo – another bust! 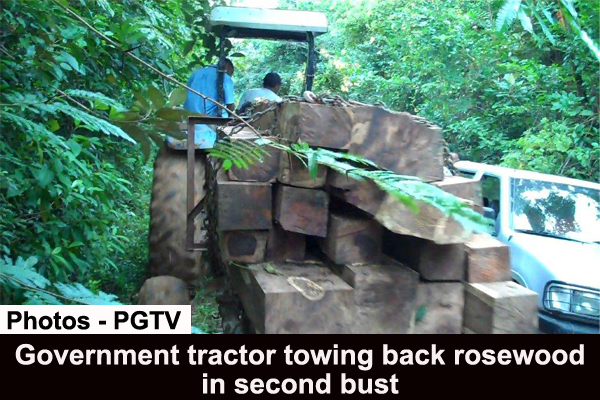 Earlier in the week there were reports of a bust of illegally harvested rosewood in Boom Creek, Toledo. Around 2,000 board feet of the hardwood were confiscated at that time and stored at the Machaka Hill Forest Station in Punta Gorda. Those logs, worth over BZ$100,000, were later stolen from the compound.

To add to that problem, Police and the Forestry Department came up on more illegally harvested rosewood yesterday, Wednesday. This time, the wood was found seven miles outside Punta Gorda. Those logs, too, were confiscated by authorities.

According to Wil Maheia of PGTV, the land owners of Gomez Estate noticed that logs from their property were going missing and alerted the Forestry and Police Departments. Maheia said that the wood was already attached to a trailer and tractor and seemed to have been ready for transportation.

According to reports, Chief Forestry Officer Wilber Sabido said that 20 pieces of rosewood were confiscated and transferred to the Punta Gorda Police Station, and another 50 pieces were transported to the Ministry of Works compound.

Sabido said that the Forestry Department is treating the situation “with the utmost confidentiality.” He also said that charges will be brought against those caught with the wood.

Palacio said that he was not in Toledo when the tractor was removed from the compound. He also said that one of his employees had removed the tractor, but that person was not authorized to do so. At this time, Palacio said, he is unsure as to what will be done concerning that employee and the tractor.

“Senior management will deal with that situation, but we all will have to submit a report on what we know,” he said. “The tractor is currently in the custody of the police, but I’m not sure what will happen concerning it.”

Hon. Lisel Alamilla, Minister of Forest, Fisheries and Sustainable Development, told Amandala via telephone today that the situation concerning the rosewood busts is presently in the hands of the Police Department, not the Ministry.

“We still have a moratorium on the harvesting right now, but the police are involved with all the confiscated material, so it will take a while before it can reach court,” she said.

The said moratorium was imposed on the harvesting of rosewood in April of this year.

Amandala contacted Punta Gorda police several times today, Thursday, for information regarding both busts and the missing hardwood from the first bust, but was unable to get comments from anyone.