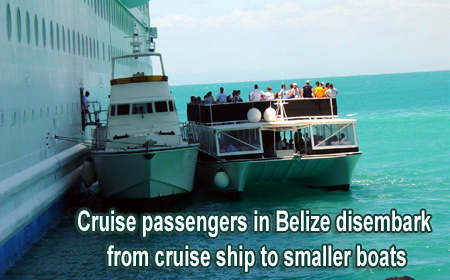 BELIZE CITY–Choppy seas brought on by a cold front over eastern Belize caused three cruise ships with over 9,000 passengers to abort their port call today, and to venture instead to Roatan, Honduras, because of safety concerns over the use of tender boats to shuttle cruise passengers from the cruise ships, near English Caye, to Belize’s shores.

Belize City appears to be the only cruise port in the vicinity that still uses boats to shuttle passengers from ship to shore, but today, a small craft caution was in effect, and winds reportedly exceeded the 50-knot benchmark set by Carnival Cruise Lines.

It was the second day in a row that Belize lost out on port calls from Carnival Cruise Lines, which had also decided not to disembark its passengers in Belize on Wednesday, when a small craft caution was also in effect for coastal Belize.

However, two ships from Norwegian Cruise Lines did send their passengers ashore yesterday, according to Karen Bevans, director of the Belize Tourism Board.

She told us that yesterday was the first 4-ship day for what is now the high season, which usually begins around Thanksgiving. However, Carnival’s policy is that it does not allow passengers to be ferried via the tenders if the winds reach 50 knots.

Bevans said that a little over 15,000 passengers could not disembark from two Carnival ships yesterday and passengers from three ships from Carnival and Princess also could not come onshore today.

Cruise tourists spend roughly US$75 a head, and so the cancellations translate to roughly $2.25 million in lost revenue, including about $40,000 in receipts by the BTB. Each passenger pays a US$7 head tax, so the diversion of the passengers means that the industry lost over US$100,000 in head taxes as well.

The next cruise ship day is Monday, and industry stakeholders, who lost big this week, are praying for calmer seas. Currently, ships travel to Belize four days a week, from Monday to Thursday, and the country only recently celebrated a milestone, reaching its one million visitor target set for the cruise sector for 2014.

Bevans said that this week’s losses notwithstanding, things should pick up in December, with cruise ships also scheduled to arrive on Friday and Saturday.

Today, the three cruise ships which did not come to Belize were re-routed to Roatan. Unfortunately, they had already booked tours with locals, who will inevitably suffer substantial financial losses due to the cancellation of the five cruise ships yesterday and today, and imminent refund requests.

Bevans said that when the Stake Bank cruise port is complete, such diversions will not be necessary, since passengers will be able to disembark without having to be too concerned about maritime conditions.