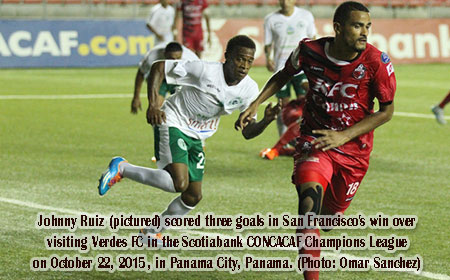 Ervin Zorrilla scored twice, while Jonathan Pinilla, Moises Gil and Eduardo Jimenez added one apiece for the Monjes, who finished second in the group.

San Francisco (2W-0D-2L, 6 points) finished behind group winner Queretaro (2W-1D-1L, 7 points) after breaking out of a recent offensive slump, having scored only once in its last three Panamanian league matches

Third-place Verdes FC (1W-0D-3L, 3 points) depart the competition having secured the first SCCL victory by any Belize side with an earlier 2-1 home victory over San Francisco. With an 8-0 loss to Queretaro earlier in the competition, it also becomes the first SCCL side to lose twice by eight goals. Thursday marked the fourth match decided by that score in tournament history.

Zorrilla’s cross set up a third-minute opener for Pinilla, before Ruiz scored his first in the 17th minute.

The 34-year-old controlled an early cross from the left with his body, firing a left-footed finish beyond goalkeeper Benito Morreira and inside the right post.

His second came 13 minutes later on a wild sequence that began when Morreira’s sliding clearance deflected off Chris Gillharry, his own defender. The ball rolled toward the goal line, and Gillharry’s last-second clearance attempt knocked off the pressuring Ruiz and into the net.
Zorrilla (33’, 42’) netted twice to give San Francisco a 5-0 halftime lead and Gil scored in the 67th minute.

Ruiz completed his hat trick in the 77th minute by controlling Gil’s right-sided cross and looping a half-volley over Moreira.

Jimenez added his goal in the last minute of normal time.

(Amandala Ed. Note: CORRECTIONS to our last Thursday night report, “Verdes loses 8-nil to San Francisco in Panama,” which was based on the preliminary report from concacaf.com. The final concacaf.com stats show the half-time score as 5-0, not 4-0, as we had reported. Goals came at the 3rd, 16th, 30th, 32nd, 42nd, 67th, 77th and 86th minutes. Also, we missed the substitution of Ricardo Jimenez for Jahron Myvette at the 39th minute of play; and there was actually a double substitution at the 58th minute when Gilroy Thurton and Oswin Williams replaced Alcides Thomas and Jorge Aleman, respectively, for Verdes.

Other players on the Verdes bench that did not see action were therefore #34 Ryan Gill, #17 Jamil Cano, and #20 Marlon Molina. Brazilian import Yoras Silva was unavailable due to accumulated yellow card suspension.