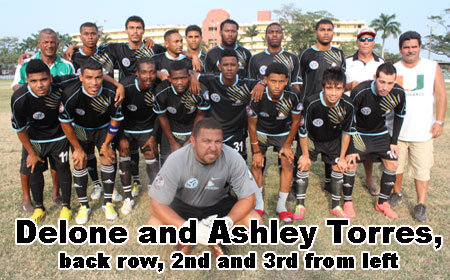 BELIZE CITY–Game 2 of the home-and-away championship series for the FFB President’s Cup 2014 was a 3-3 draw on Saturday night in Independence, giving home standing Sagitun the aggregate 6-5 victory, as they had taken Game 1 over San Antonio FC by a 3-2 margin back on August 31 at the Ricalde Stadium in Corozal Town.

Game 2 was postponed from the previous Saturday, September 6, due to weather, and this allowed Sagitun’s Delone Torres, who was in the U.S. with the National “A” Team at the Central American Cup, to return home in time for the critical Game 2 this past Saturday night, September 13.

In Saturday night’s return match at the Michael Ashcroft Stadium in Independence, the home team Sagitun jumped out to a commanding 3-nil lead, with goals from Delone Torres (10’ & 17’) and Rollin Burgess (25’); but visiting San Antonio FC came back strong with goals from Christian Pena (42’), Alexander Innis (54’) and Ian Daniels (88’) to secure a 3-3 draw, but it still wasn’t enough. Sagitun held on till the final whistle, thus claiming the aggregate 6-5 victory and the championship.

(Ed. Note: The FFB President’s Cup is an “open” tournament where there are no age restrictions, similar to the Premier League of Belize tournaments. Since its election in March of 2012, the new FFB administration has promised to hold national youth tournaments in different age categories, but these have not yet materialized.)