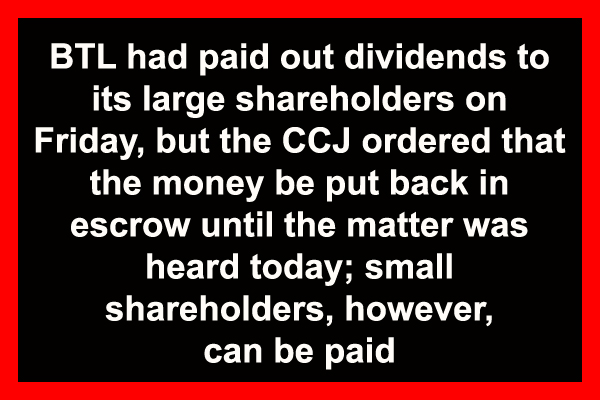 On Friday morning in an emergency hearing via a 3-way video conference, lawyer for the Government of Belize Denys Barrow announced to the Caribbean Court of Justice that as of 8:05 a.m., they had paid out dividends to their large shareholders.

The Court of Appeal had refused to extend a 3-month restraint imposed by the CCJ, which came to an end on Friday, December 14, 2012. The dividends paid out to the large shareholders — Social Security Board, Central Bank of Belize and GOB — amounted to almost $12 million.

But an emergency hearing was ordered by the CCJ to review the decision of the Court of Appeal. And at that meeting, which was held at 9:00 on Friday morning, Barrow made the announcement of the dividend payments, in the presence of Eamon Courtenay, attorney for British Caribbean Bank, and Godfrey Smith, attorney for Dean Boyce and Trustee of the Employees Trust.

Courtenay and Godfrey reacted to the announcement with vehement opposition. But so did the President of the CCJ, who, after hearing arguments posed by both sides, ordered GOB to put back the money into an escrow account by 2:00 p.m. Friday, and to let it remain there until they had reviewed the Court of Appeal’s decision and given their own.

In speaking with the press after Friday’s hearing, Godfrey told reporters that the CCJ just barely fell short of holding GOB in contempt of court. He went on to say that the President informed Barrow that GOB did not act as it should have in such a matter, especially since they knew that an emergency hearing was to be held concerning this issue.

When asked if he felt that GOB acted inappropriately, Barrow replied “No, I don’t feel so…Okay, the Court of Appeal has spoken, and therefore, I, Telemedia, can now act as the law and as our obligations as a company require us to act.”

Today, after the CCJ held another hearing via a 3-way video conference, BTL emerged with a victory, but a loss as well. BTL was informed that there will be no more dividend payouts to the major shareholders, until the matter is heard and the CCJ makes a decision. The victory the company secured, though, was the go-ahead to distribute dividends to small shareholders —a permission for which they had applied to the Courtin the wake of Friday’s ruling.

Small shareholders of BTL, almost 1,500 of them, will thus be able to look out for dividend cheques in the near future.