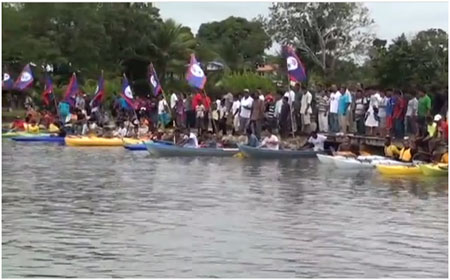 BARRANCO, Toledo District, Mon. Sept. 19, 2016–The Sarstoon Island Eco Challenge which was partially carried out by the Belize Territorial Volunteers, led by Wil Maheia, a nationalist, civic leader and businessman of Punta Gorda, was held on Saturday, September 17, and it was hailed as a success.

About 500 people converged at Barranco, and at about 9:00 that morning, about 50 people in kayaks and canoes lined up at the wharf to participate in the Sarstoon Island Challenge.

Wil Maheia said that the challenge was to paddle from Barranco to Sarstoon Island, paddle around the island and back to Barranco, a journey of about 8 miles. Prizes were presented to the top 5 finishers in each category.

Maheia told us that the Eco Tourism Challenge was designed as a tour for Belizeans to see the eco-tourism benefits of the Sarstoon Island, to familiarize Belizeans with the island, since it is a part of the Jewel, and to test the weight of the agreement for peace between Guatemala and Belize in the Sarstoon area.

Maheia said that on Saturday, all was going well from Barranco, but as they entered the mouth of the Sarstoon River, they were confronted by the Guatemala Navy boat with armed soldiers. Maheia said that the Guatemalans’ boat was parked in front of the BDF Forward Operational Base, in Belizean territory.

The Guatemalans intercepted the boats and tried to stop them from proceeding to the island, Maheia said, but he intervened and told them that they were in Belize territory, and that they could not stop them.

A Guatemala Navy Officer came up in another boat, and he agreed not to prevent the race, and the race proceeded.

However, the Guatemala boats travelled beside the race boats around the island, after which no other encounter occurred and the event went smoothly.

Maheia said that he was disappointed, because the Guatemalan soldiers were clearly in Belize territory, in front of the BDF base, and that the country should launch a diplomatic protest.

After the challenge, a peace concert was held and Chocooro and the Tribal Vibes from Punta Gorda provided the music. There was also a football marathon. It was a day of fun enjoyed by everyone, and Maheia said that they plan to conduct the challenge next year.