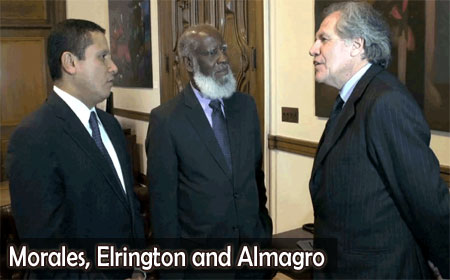 BELIZE CITY, Wed, June 22, 2016–Belize and Guatemala were engaged in a 5-hour meeting at the headquarters of the Organization of American States (OAS) on Tuesday evening, but still, there is no definite mechanism to resolve the high-tension conflicts between Belize and Guatemala at the Sarstoon, in which Belize has been on the receiving end, having been blocked from freely accessing its side of the Sarstoon.

Just last week, a group of Belizeans, including Wil Maheia of the Belize Territorial Volunteers and Mike Rudon of News 5 headed to the Sarstoon—but nine soldiers of the Guatemalan Armed Forces (GAF) tried to stop them, insisting that the Belizeans, who were well on the Belize side of the river, were in Guatemala’s national waters.

After the incident, the Government of Belize issued a statement saying, “…the incident [if verified] would constitute a breach of the spirit of the Confidence Building Measures and must also be rejected as prejudicial to the ongoing diplomatic efforts, including next week’s meeting in Washington, to establish a bilateral Cooperation Mechanism for the Sarstoon.”

This may provide a clue as to why no definitive mechanism has yet been established. However, a press release issued by the OAS said that “good progress was made during the meeting, which concentrated on the development of best practices for the de-escalation of tensions in the Sarstoon River.”

The Washington meeting was a follow-up from the meeting held on May 24, 2016, in Istanbul, Turkey where the parties spoke on the sidelines of a UN summit, in their first attempt to discuss the Sarstoon problem.

Secretary General meets with the Foreign Ministers of Belize and Guatemala – June 21, 2016 from OAS/OEA TV on Vimeo.

Secretary General meets with the Foreign Ministers of Belize and Guatemala – June 21, 2016 from OAS/OEA TV on Vimeo

While Belize had since issued a statement announcing that Belizeans would have “untrammeled access” to its side of the Sarstoon, the GAF had on multiple occasions since, blocked the access of Belizeans to the area.

Former Deputy Prime Minister Gaspar Vega publicly complained of Guatemala’s military aggression at the Sarstoon on the occasion of the summit of the Association of Caribbean States earlier this month.

“We did not reach an agreement to settle the differences that we have with Guatemala,” Belize’s Ambassador to Guatemala, Alexis Rosado, told 7News director Jules Vasquez at the conclusion of Tuesday’s talks.

Rosado said that the parties discussed “international standards and best practices, and those are the things that will guide us moving forward, until such time that we reach something concrete.”

He said, “Belize has a very clear position and the Guatemalans are aware of the Belize position, in accordance with our Constitution and with international law.”

“Well, for now we have some level of assurances that we will continue doing all in our power to continue de-escalating tensions in the Sarstoon River,” Rosado remarked.

He said that the military generals from both sides, Belize and Guatemala, “are in the best of working relationships and we have also committed to keep that level of communication open.”

Vasquez, who had traveled to Washington to report on the meeting, asked whether Belizeans who visit the Sarstoon would continue to be harassed by Guatemalans. To this, he also received no definite answer.

Rosado said: “…if anybody wants to test it, they should go down there and see what happens.”

Maheia told us that he just might put it to the test.

Commander of the Belize Defence Force, Brigadier General David Jones, has since indicated to KREM News that Belizeans who want to visit the area should inform the BDF soldiers at the Sarstoon Forward Operating Base and they would be allowed to proceed, if they abide by the laws — in reference to maritime safety laws.