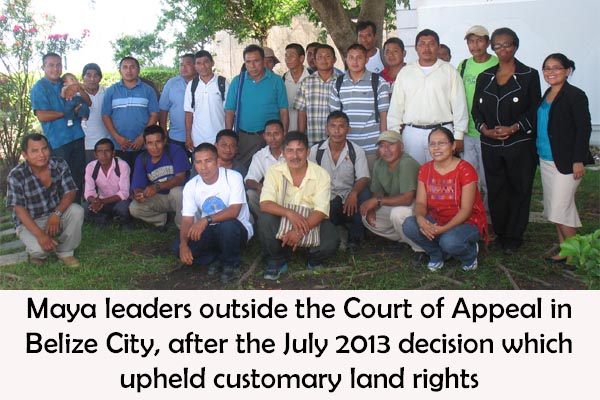 The Maya Leaders Alliance (MLA) today responded to a statement made by Prime Minister Dean Barrow in the City of Belmopan on Monday, contending that the Sarstoon Temash National Park (STNP) is not covered by a court decision which declares Maya ancestral lands across southern Belize.

The Maya community has maintained that the park is included in their ancestral lands – and that when the Government of Belize declared the property to be a national park, it did so without consulting them.

The dispute has deepened because US Capital Energy is preparing to drill for oil inside the park, and on village lands.

Back in 1994, the Government of Belize put 41,000 acres of southeastern Toledo under protected status, making it one of the largest protected areas in the country.

“The SATIIM National Park is a national park, you know,” Barrow told journalists on Monday.

He added that, “In my view, there can be no question of any kind of ownership other than the ownership of the state when it comes to the national park, which has been legislated over.”

The Maya Leaders Alliance (MLA) responded today saying, “The Prime Minster has said publicly that the area within the national park is not Maya land, even though the court in the 2007 land rights case admitted into evidence and acknowledged that Conejo village includes land in the park.

“The government is well aware of this and intentionally excluded Conejo’s land from U.S. Capital’s permit to operate in the park. Now, the government alleges that ‘there can be no kind of ownership other than state ownership’ in a national park.”

However, the MLA contends that, “…the National Parks Systems Act does not disturb existing ownership of lands within a national park, nor does it give ownership of a park to the state.”

The MLA is of the view that the Government has conveniently disregarded the central verdict of the court: the affirmation that the Maya do have customary land rights in southern Belize.

“It has also chosen to ignore the invitation of Maya leaders to resume negotiations about how best to implement Maya land rights that have now been upheld three times by the courts and by human rights bodies of the Organization of American States and the United Nations,” they add.

The Maya leaders have decided to lodge an appeal at the Caribbean Court of Justice, to revisit those portions of the Court of Appeal judgment which, they contend, removed lawfully ordered protection of their rights.

“Even as we appeal, we would prefer to resolve these issues through dialogue with our government on the premise that our land rights exist,” the MLA said.