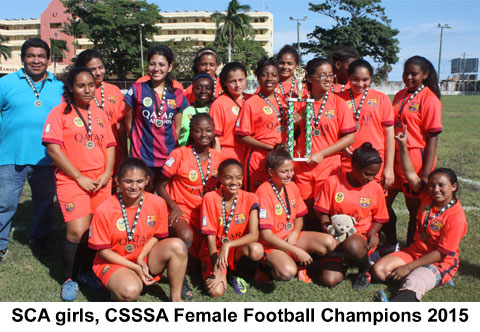 The female championship game was played on Saturday along with three other male games, including two by eventual champions, Gwen Liz High.

In game 1 on Saturday, Wesley defeated E.P. Yorke, 2-0, with goals from Bernard Bailey.

Game 2 saw Gwen Liz with the 2-1 win over SJC. Devaughn Zuniga and Naim Wilson shook the net for Gwen Liz, while Dmitri Fabro scored for SJC.

Game 3 was the female championship match between SCA and Gwen Liz High, and it was SCA coming away with the 2-nil win and the championship, both goals coming from Gabriela Mendoza, a 13 year old first former. 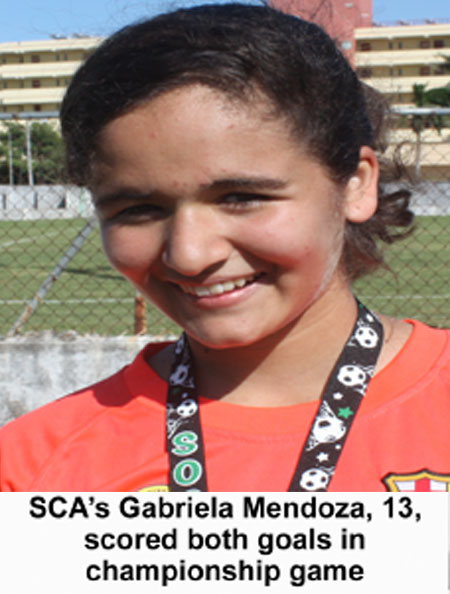 In game 4 on Saturday, it was Gwen Liz boys taking the field again, this time against Ladyville Tech, and this one had to go to a penalty shootout, with Gwen Liz boys prevailing, 4-3, to earn a spot in the finals. Naim Wilson, Clinton Dawson, Jovian Usher and Amil Crawford hit the target for Gwen Liz; while Alfredo Franco, Hakeem Smith and Aaron Perez scored for Ladyville Tech.

The male championship game was played yesterday, Wednesday, at the MCC, and it was 1-1 in regulation, with Jovian Usher shaking the net for Gwen Liz, and Jonathan Perrera for Wesley. In the penalty shootout that followed, Gwen Liz was victorious, 3-2, to take the CSSSA male football championship. Scorers for Gwen Liz were Naim Wilson, Clinton Dawson and Jovian Usher; while Bernard Bailey and Shemar Thompson tallied in the loss for Wesley.