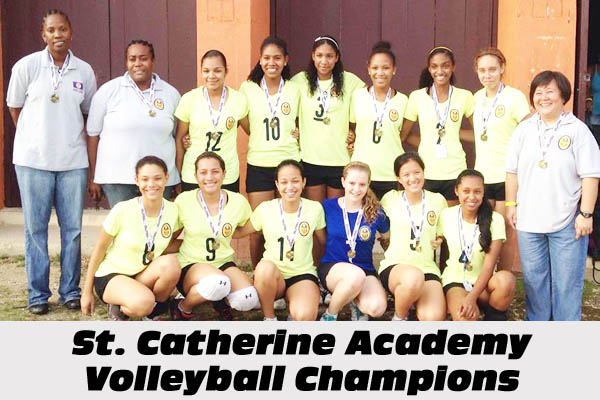 The National Secondary Schools Sports Association (NSSSA) held its Annual National Volleyball competition over the past weekend, with games played last Friday and Saturday at the St. John’s College Gymnasium in Belize City.

A great show of talent was definitely displayed at the 2-day competition, as 8 teams took part in the national contest, which included 4 male and 4 female teams, representing the four different regions of the country.

Fans, parents, supporters and fellow schoolmates of the participating teams packed the gymnasium to witness the competition as it got underway, and cheered energetically for their respective teams.

After the awards were given out, Amandala spoke to the male and female MVPs and the coaches of the two winning teams for the male and female categories. Lupita Quan, head coach of the SCA Volleyball team told us that it’s always great for them to be the champions, even after their 6th consecutive win.

Meanwhile, Sherika Burton from SCA, who was crowned female MVP, said that she feels very proud and happy because they have been able to keep up with their tradition of winning every year. She mentioned that it was a team effort, and that she is honored to represent Belize in the CODICADER Tournament, which will be held in Guatemala in 2014.

San Pedro High School has participated in the volleyball nationals for years, hoping for a win. Head coach, teacher and past student of San Pedro High School, Eric Santizo, said that he felt that all their hard work has finally paid off. He stated that he felt good because they are now able to take the championship to San Pedro, which is what they have wanted to do for a while. Santizo said that they will now be working on developing volleyball, not only on the island, but in other places in Belize.

Gabriel Nunez, the male MVP who plays for the San Pedro High School volleyball team, told Amandala that he feels proud to have led his school to win the volleyball nationals for the first time. Although the competition was challenging and the games were hard-fought, Nunez said that he felt good that they pulled through and came out with the win.

His coach, Eric Santizo, then thanked all their sponsors and all the people who made it possible for them to be a part of the competition once again this year.

Both the San Pedro High School boys’ team and the St. Catherine Academy girls’ team will go on to represent Belize in volleyball next year at the CODICADER Games in Guatemala.