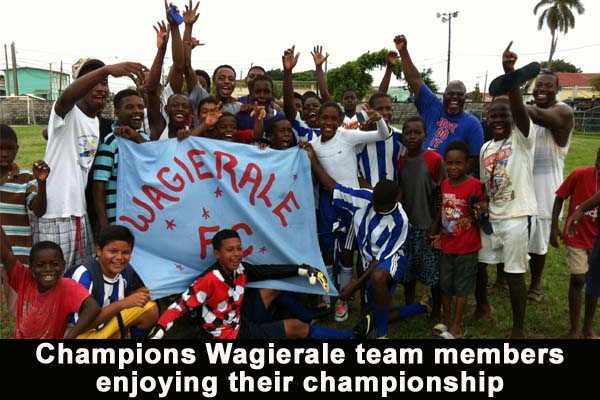 The Stann Creek Football Asssociation (SCFA) and Dangriga Girls & Boys Club U-15 Tournament, sponsored by Frank “Paapa” Mena, came to an end on Sunday, June 1, after two months of football action with the future footballers of Dangriga.

The first afternoon match was for 3rd place, where DYFA went up against Wagiya. DYFA won, 4-1, with 3 goals from Gregory Ovado, Jr. and 1 by Myrick Marshall, Jr.; while the goal for Wagiya was by Warren Moss, Jr. In the championship match-up for 1st and 2nd place, featuring Umadagu vs Wagierale, the regular time ended, 3-3, with 2 goals from Jefton Apolonio and 1 from Gabriel Ramos for Umadagu, and 2 goals from Garrett Bowen and 1 from Latrell Middleton for Wagierale. Wagierale won, 5-4, in the penalty shoot-out. The final game was highly contested, and both teams played their hearts out.

Development for the future is a key, and the SCFA will continue its good work with our youth programmes. The SCFA would like to thank all 8 teams who participated in the U-15 tournament and our sponsor, Mr. Frank “Paapa” Mena.

(Ed. Note: Hold up your heads, Umadagu. You battled like champions to the end. We’re proud of you both. Congrats to the champions, Wagierale! To the sub-champs, Umadagu, your day will come.)