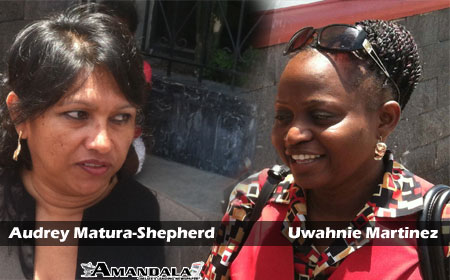 BELIZE CITY–President of the Christian Workers Union (CWU), Audrey Matura-Shepherd, announced to the media Tuesday morning that it had just been agreed in a face-to-face meeting with officials of CIBC First Caribbean International Bank that Uwahnie Martinez, the loans officer from the Dangriga branch who had recently resigned after tensions peaked with the management over restrictions she said she has faced in using her native language, could part ways with the bank immediately with all her benefits intact.

“The bank believes that the matter has become very tense or contentious, whatever word they want to use, and so Ms. Uwahnie Martinez has effectively been released from her job today,” Matura-Shepherd notified the press.

Martinez told the media that the meeting with the bank was cordial but lacking in some areas, as “the bank itself has a lot of issues to resolve.”

She expressed hope that “…at the end of the day that for the employees’ sake that remains that they practice fair game.”

Matura-Shepherd clarified that Martinez, who had worked with the bank for 14 years, never asked to leave early, but handed in her resignation with 8 weeks’ notice, to be effective in October.

Although the bank has said that an informal customer complaint against Martinez had been withdrawn and so is now a dead issue, according to the CWU president, a live issue remains, and that is the last performance appraisal given to Martinez. The CWU has demanded supporting documentation to probe into the disputed performance appraisal; however, the union has indicated that they have not gotten the requested documentation.

Apart from being a banker, Martinez manages Palmetto Grove Lodge, a family business in her home village, Hopkins, Stann Creek – a Garifuna village where the culture remains vibrant and strong.

The fallout between Martinez and the bank apparently occurred after the management of the Dangriga branch allegedly began enforcing an unwritten policy restricting the speaking of Garifuna by employees, including with Garifuna customers who have often engaged staff in the native language.

We asked Martinez to explain her understanding of the bank’s policy, and to clarify when she observed a change in her freedom to speak in Garifuna.

“There was never a written policy. However, you can see it from the demeanor of the manager who is in Dangriga, her dislike for us speaking the language. I am a proud Garifuna; I’ll always be a proud Garifuna. Having been told that English is the only language to be spoken in the banking hall, when for the last 14 years we’ve been greeting customers in our native Garifuna language there in Dangriga, in the bank, I think it’s just discriminatory and not only that, the manager herself is overreaching, wanting control over all aspects of our behavior,” Martinez said.

Ella Hoyos, CIBC Managing Director for Human Resources out of its Barbados headquarters, told the media after Tuesday’s meeting that, “I think that there are members of that community who know us well and know that we do not tolerate discrimination, that we would never do anything deliberately to offend them and that even if a mistake was made—and I am not saying one was made—that the bank would treat it seriously and address it. To be clear, it is never the intention of our bank to do anything that could be considered disrespectful or to not honor the multi-cultural community which is Belize, and in which we have always operated.”

However, Matura-Shepherd said the bank makes it seem as if it is just common courtesy.

“They try to make it look as though, oh it’s more about shouting and discourteousness. It’s beyond that because what are you saying, that our member is always shouting across the hall at the bank. If that’s the case, then a lot of Belizeans shouldn’t go into any of the banks, because Belizeans like to walk in and give a loud shout,” Matura-Shepherd said.

In Parliament last Friday, Ivan Ramos, Dangriga area representative for the Opposition People’s United Party, again denounced any moves to stifle the use of the Garifuna language in the banking sector.

He noted that apart from Martinez’s case, there is a second Garifuna employee of CIBC First Caribbean Bank in Dangriga who was put on leave after an exchange with a customer in Garifuna.

According to Ramos, approximately 3 weeks ago, Simeon Joseph, Jr., who joined the bank 32 years ago when it was Barclays Bank, “was put on immediate leave because of speaking Garifuna to a fellow customer.” Ramos said that a customer had spoken to Joseph in Garifuna, and he had simply replied in that language.

Matura told us today that Joseph’s case was not fully addressed in the Tuesday morning meeting, but it was mentioned.

Since Martinez is being allowed to leave the bank with immediate effect, Joseph, who was due to return from leave, will handle the loans desk.

“Mr. Joseph goes back to work today, because since Ms. Uwahnie Martinez leaves today and there are only two people who hold that desk, the bank cannot have that desk empty. But his leave came to an end today so he goes back today, but he has made an issue as to how they have treated him as well,” the CWU president said.

She said that Martinez insists that she has suffered discrimination and it is a matter that is beyond the union, but which can be taken up in court, if Martinez so chooses.

The CWU president said that despite Martinez’s resignation, the union will still continue to seek resolution on her pending issues with the bank.