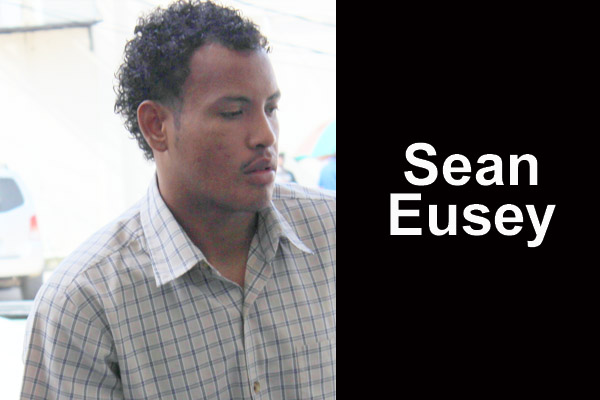 Sean Eusey, 26, a computer technician of #9 New Road, was charged today with aggravated assault of an indecent nature and theft.

According to a police press release, a woman, 31, from Sandhill, reported that at 3:30 Friday morning, she was standing at the Pallotti roundabout waiting for a friend to pass by and pick her up. She said that she saw a white van coming toward her and heading in the direction of the Philip Goldson International Airport.

When the van stopped in front of her, she got into it without a second thought, thinking it was a church van. After getting into the van, she noticed the driver to be a man in his mid-20’s and they were the only ones in the van.

The van headed north and while travelling, the driver asked if it would be alright for him to stop off in Belama to drop off some money for his cousin. The woman indicated that it would not be a problem and the driver turned into Belama. After driving around in Belama for some time, the man turned into an open lot on Spt. George Arthurs Street, and exited the vehicle.

The man then came around to the passenger door where the woman was sitting, and opened it, and much to the chagrin of the woman, attempted to fondle her breasts.

A struggle ensued and the woman started screaming for help, and was able to escape from her attracker’s grasp. A concerned neighbor heard her cries for help and called the police while the man was driving away from the area.

When the police arrived, they took the woman to the police station, where she recounted her attack to them. She told police that during the struggle with her aggressor, her gold chain got lost and her Samsung QWERTY keyboard cell phone, valued at $200, was missing as well.

Eusey pleaded not guilty to both offenses, and although there was no objection to him being granted bail, he was initially denied bail because of his outstanding fines totaling $1,220 dating back to October 2012.

However, Eusey managed to pay the fines and this afternoon, he was offered bail of $1,000 and one surety of the same amount, which he was able to meet. Eusey’s bail came with the condition that he has to stay away from the victim and must report to the Queen Street Police Station every Monday between 7:00 a.m. and 7:00 p.m.

Eusey is scheduled to appear back in court on September 6, 2013.