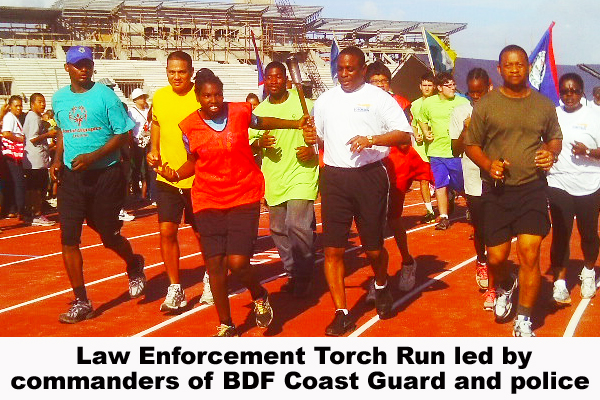 This morning, members of all the major sectors of Belize’s law enforcement agencies were out in full force in Belize City as they participated in the 2nd Annual Law Enforcement Torch Run.

The Law Enforcement Torch Run is held annually to raise both funds and awareness for disabled children across the country. The 5-day torch run was originally started by the Belize Police Department, however all law enforcement partners, including the Customs and Immigration Departments, joined in the effort to bring the torch from all the way down south in Punta Gorda to Belize City.

As part of the last leg of the run, elements of the Belize Police Department (mainly recruits), the Belize Defence Force, and the Belize Coast Guard ran untiringly while chanting different slogans through the principal streets of Belize City in the wee hours of dawn today.

This morning, they actually started in Ladyville, which is about 10 miles from Belize City, and came into the city with different bearers leading the run and carrying the torch at specified intervals.

They were led by Assistant Commissioner of Police, Russell Blackett; Commandant of the Belize Coast Guard, Admiral John Borland; and Commander of the Belize Defence Force, Brigadier General David Jones.

Amandala spoke to all three to find out the purpose of their participation in the event. ACP Blackett said, “We’re [the Police Department] gearing up for international events. We’re trying to raise about $20,000 in benefit of the Special Olympics International. Sr. Supt. Louise Willis, who is in charge of the Community Policing initiative, was the person who brought this on stream. It started nearly 4 to 5 months ago, and today is the grand finale of the event.”

Admiral John Borland told us that they had up to forty Coast Guard members participating in the event. He said, “We’ve been out here since Monday; we started in Punta Gorda and ended up here in Belize City at the culminating event. What we’re doing today is very significant to the job of helping children with special needs; it takes you back to the great Nelson Mandela and the people who started Special Olympics. We’re very supportive of this initiative and we wish to continue.”

General David Jones told us that they started the run at Central Park in Punta Gorda and came all the way up the highway until they reached Belize City. Jones said, “In the final stage this morning, the BDF took the lead; we started off from Price Barracks in Ladyville, and then we handed over the torch to the Coast Guard at the Haulover Bridge.”

Around 200 individuals took part in the Torch Run, which set the stage for the Special Olympics competition that was also held on Friday at the Marion Jones Sports Complex in Belize City.