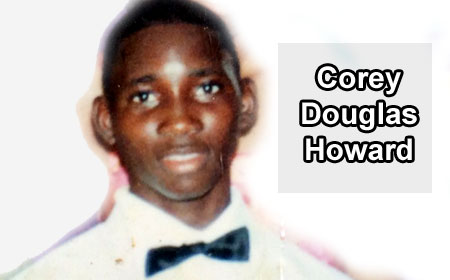 BELIZE CITY–Today saw another slaying in the pitiless streets of Belize City, and the circumstances continue to puzzle the victim’s family, since the young security guard, who was on the way to his workplace, was not known to have any ties to the streets or any of the notorious gangs that operate therein.

After a slight lull in unremitting gun violence over the past few days, gunfire ruptured the morning’s serenity on Sibun Street in the “Back-a-Town” area of the Old Capital, claiming the life of Corey Douglas Howard, 21, a resident of St. Martin De Porres.

Howard, a security officer who had recently been employed at KBH Security, was reportedly ambushed and shot multiple times within sight of his workplace, where he had been heading to pick up equipment to go on the job.

According to Police Press Officer, Raphael Martinez, the shooting took place at about 7:40 a.m., and although Howard was transported to the Karl Heusner Memorial Hospital, where he had been undergoing surgery to treat his injuries, he unfortunately succumbed to the gunshot wounds five hours later, at about 12:40 p.m.

As he expressed condolences to the victim’s family, Martinez conceded that police are yet to ascertain a motive for what he termed as a “senseless” shooting, and neither have any suspects been detained.

The deadly violence on the streets continues

When asked whether the assailants may have targeted Howard because of the belief that he may have been in possession of a company-issued firearm, Martinez responded, “In the past indeed, we’ve had several attempts by criminals at security officers to actually rid them of their weapon, their licensed firearms, in order to commit criminal activities, so we are indeed looking at that area; however, we cannot ascertain whether or not that is the motive for this senseless shooting.”

Police, however, have not so far been able to establish if the victim was in possession of a firearm at the time of the incident.

Howard was shot in the chest, abdomen and neck, and six expended 9mm shells were recovered from the crime scene.

Leon Howard, the brother of the deceased, told 7 News that Corey was a peaceful, jovial individual who was always laughing and joking, but was not in fact affiliated with any gang; therefore, the incident was really shocking to the family, who, he said, is just trying to cope with the situation by being strong and united.

Amandala understands that Howard, who is the father of a 3-year-old daughter, started working for KBH Security about three months ago, and was walking to work to go pick up a radio and other equipment from the KBH headquarters, which is located two blocks away on Sittee Street, when he was gunned down.

Belize City Police say that they are interviewing persons of interest, while other sources have told us that the security officer did not have a weapon when he was targeted.