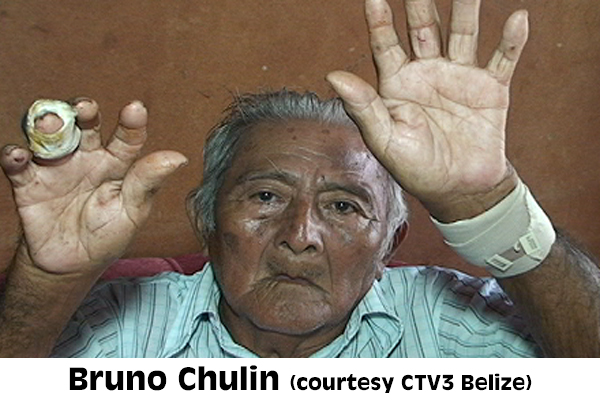 A senior citizen of San Roman, Corozal, was assaulted with a knife by a man whom he knows, who had a disagreement with his son over cattle.

Bruno Chulin, 77, a cane farmer, suffered a cut wound to his arm and middle finger, and the man who allegedly stabbed him is Victor Lanza, 25, a fellow resident of the village. The incident occurred on Friday, February 7.

Lanza was taken to the Corozal Magistrate’s Court yesterday, Monday, where he was offered bail of $3,000 and ordered to return to court on Tuesday, April 8.

Chulin was taken to the Corozal Hospital, where he was treated for the cut wounds and later released.

Lanza, however, was unable to meet bail, and he has been remanded into custody at the Belize Central Prison until he can do so.

Chulin told police that he was riding home about 7:00 Friday morning from his farm when he was approached by Lanza. Chulin reported that Lanza told him that he was going to kill him and took out a butcher knife and attacked him.

Chulin reportedly held on to Lanza’s arm and struggled with him to take away the knife, but Lanza was able to cut his arm and escape.

In an interview on CTV 3, Chulin said that he believes that the attack on him is due to an old ‘beef’ Lanza has with his son over cattle.