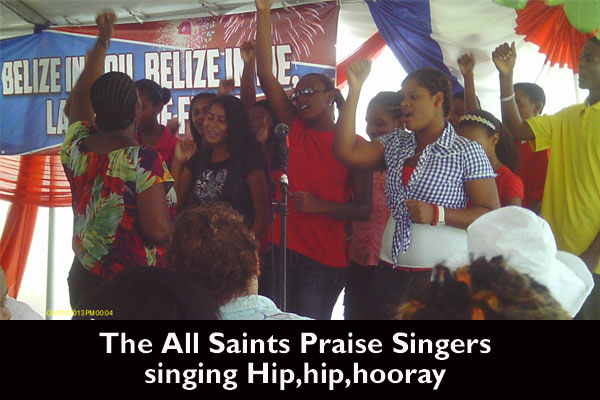 Ceremonies to mark the official opening of the September Celebrations in Belize commenced at St. George’s Caye today.

Scores of people ventured out to the island for the opening ceremonies, which began at approximately 11:30 a.m., and included a welcome address from the president of the St. George’s Caye Committee, John Searle, Jr. In his speech, Searle mentioned that St. George’s Caye was the first British settlement and its original name was “Cayo Cocina”, which when translated, means Cooking Caye.

Chairman of the National Celebrations Commission, Hon. Manuel Heredia, Jr., also gave an address that included a short history of the island.

Heredia said that it struck him that whenever Belizeans think of the Battle of St. George’s Caye, they often think that it was a battle that was fought primarily between the British and the Spaniards. He noted however, that historical records and archeological research on the national landmark have established that this was certainly not the case. He said that the settlement included Africans, free Creoles, the British and various people of diverse European origin, including Spanish and Portuguese in the year 1798. Heredia also said that the captain of one of the British Honduran boats was also an American, who got shipwrecked on the reef.

Heredia told the audience, “We know that the Battle of St. George’s Caye, however, changed the path of Belizean history. We also know that this great island was only made possible by the coming together of people of diverse cultures who were prepared to sacrifice their life for the pursuit of freedom, and not just any freedom, but freedom in this great territory that is now Belize. From the very birth of our nation, ours has been a country that has encouraged equality, regardless of culture or creed. Our willingness to embrace people of different cultural origins has been pivotal in the evolution of Belize’s identity.”

Following the speeches, there were two cultural presentations. The first was a performance by Jael August, the winner of the Patriotic Song Competition, who sang her winning song entitled “Great Belize.”

Next was the All Saints Praise Singers, who sang two songs, including the popular September 10 March song.

There were a number of dignitaries and diplomats at the ceremony as well, including the Governor General, Sir Colville Young; Mayor of Belize City, Darrell Bradley, members of the Belize Tourism Board, members of the September Celebrations Commission, ambassadors and other invited guests.

There was also a sailboat regatta that was held in the seafront during the day.