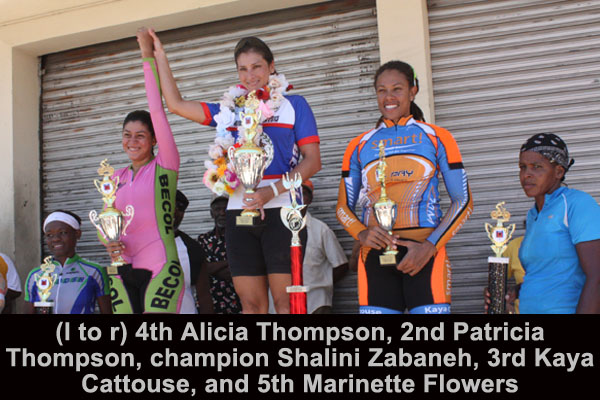 Nine (9) female cyclists started out from Columbus Park in San Ignacio on Sunday, May 18, shortly after 8:00 a.m. for the 25th running of the Female Cross Country Cycling Classic, which journeyed along the George Price (Western) Highway to Belize City, ending in front of Leslie’s Imports, where cycling fans gathered to greet the gallant ladies on completion of the grueling almost 70-mile ride.

Belize already had a male Mexican Cross Country Champion earlier this year in Juan Pablo Magallanes, so fans were a bit uneasy at the prospect of seeing another Mexican take the Female Cross Country garland.

Perhaps that apprehension had something to do with the unusually early breakaway of 3 riders – Shalini Zabaneh, Kaya Cattouse and Patricia Chavarria, leaving the Mexican and the others behind playing catch-up. Rodriguez Canto was also eventually dropped by the other female riders, who attempted a chase of the lead 3.

Within the course of the Cross Country race, there was also a special Queen of the Hills contest, where points were garnered for 1st, 2nd and 3rd place finishes at 5 different locations – Go Slow (Mile 62.5), 3 Sisters (back of Mount Hope at Mile 60), Brick Wall (Mile 53), Old Man Hill (Teakettle, Mile 51), and Top of Hill (Mile 29). Patricia Chavarria (BECOL) was crowned Queen of the Hills with 21 points, followed by Shalini Zabaneh (Sagitun) with 13 pts, and Kaya Cattouse (Smart C-Ray) with 11 pts. For her Queen of the Hills prize, Patricia received One (1) Year 4G Service valued at $600.00, sponsored by Digicell.

But the bigger prize remained at the finish. Knowing her strength lay in pacing and not in sprinting, Shalini made her big move nearing Hattieville (Mile 15), breaking away from Kaya and Patricia, and neither one could catch her. That was the race. It was Shalini’s 5th Female Cross Country championship. She had also won the garland in 2008, 2010, 2011 and 2013.

Patricia did most of the hard pedal work as they mounted a determined effort to try and catch Shalini, explained Kaya after the race; and so, when the two of them approached the finish line just over a minute after Shalini, she, Kaya decided to settle for third place, refusing to sprint against Patricia, who cruised in for second place. The only sprint occurred between the veteran Marinette Flowers and young Gabrielle Lovell for 5th place, with Marinette proving that she still has some spring in those legs.

Only Kerah Eiley did not finish the journey. The Mexican Laura Rodriguez came in after the award ceremony was over, a full 35 minutes after the winner. Her manager, Manuel Leon Osorio explained that she had experienced problems with her bicycle gears.