Home Crime Shane Bennett hands himself in to police
CrimeGeneral

Shane Bennett hands himself in to police 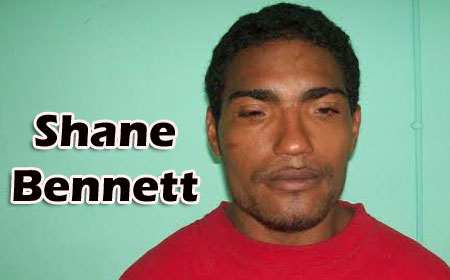 DANRGRIGA, Thurs. Jan. 29, 2015–On Sunday night, January 25, a woman lived her worst nightmare when she was abducted, tied up, raped and sodomized by two men.

The woman had been heading to her home in the Benguche area of Dangriga Town in a car being driven by her friend at about 8:00 that night when they were held up by two men who were armed with a knife and a gun.

The woman was tied up in the vehicle and a knife was put at her neck, while her friend was ordered at gunpoint to drive the vehicle to the beach near the cemetery. At the beach, the assailants tied up the driver, then took turns raping and sodomizing the woman. When they were done, they evicted both their victims from the vehicle, and drove away in the car.

The man and the woman managed to free themselves from the knots that restrained them and went to the police, where they made a report.

The police took the woman, 25, to the Dangriga Hospital, where she was examined by a doctor who certified that she had been sodomized.

Police carried out a quick investigation which led to two men, who are known to police. They are Robert Taylor, 22, of Monument Site, Dangriga, who has been arrested and charged in court with rape, aggravated assault, theft of a motor vehicle, abduction and robbery, and a second man, Shane Bennett of Dangriga, whom police say had been on the run.

Robert Taylor was taken to the Dangriga Magistrate’s Court, where he appeared in front of Magistrate Patty Arana, who remanded him until March 30.

A warrant was then issued for Shane Bennett’s arrest.

On the night of the incident in connection with which both Taylor and Bennett have been charged, a police investigation led to the two men, both of whom are from Dangriga. Police went on the hunt to find the vehicle that Taylor and Bennett had stolen from their victims, and when they saw the two men and went to confront them, Bennett reportedly opened fire on them, and they returned fire.

However, the officers were distracted by the arrival of another vehicle, causing the men to escape.

Taylor was captured the next day, Monday, January 26, in Dangriga, and taken to court that same day, where he was remanded, and Bennett handed himself in yesterday, bringing police’s search for the fugitive to an end.