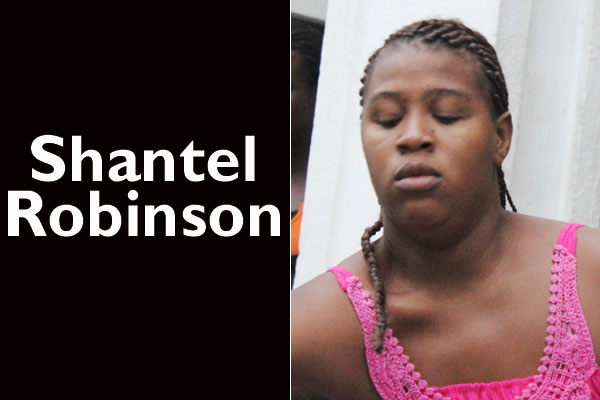 She went out after locking her two children in the house, which caught fire

This afternoon, Shantel Robinson, 25, a resident of #1946 Cannondale Drive, Apt. # 7, was taken to court, where she appeared before Magistrate Leslie Hamilton and was charged with two counts of child abandonment.

According to police, reports indicate that at 11:00 Thursday morning, Robinson left her house, locking her daughter Shaniqua, 4, and her son Shevonne, 3, inside the house by securing the front door from outside.

At 11:25 that same morning, other tenants of the apartment complex observed flames coming from out a window of her apartment, and heard the children screaming for help.

The children were unable to come out of the room on their own because the door had been locked from the outside.

A heroic neighbor then stomped down the door, and another rushed inside and managed to get the children out of the inferno. They were whisked off to the Karl Heusner Memorial Hospital, where they were treated for minor burns and smoke inhalation.

Robinson was unrepresented when she appeared in court, but no plea was taken from her, as the prosecutor indicated to the court that at this time he is unsure whether the matter will be treated as an indictable offense, which would be heard at the Supreme Court, or as a summary offense to be heard at the Magistrate’s Court level.

Robinson was, however, offered bail of $1,000 and one surety of the same amount, but at the end of today, she was unable to meet bail and was remanded to the Belize Central Prison. Her next court appearance is scheduled for October 3, 2013.

The two children are currently in the care of the Social Service Department.