“Shoa Wi Self” Awards this weekend 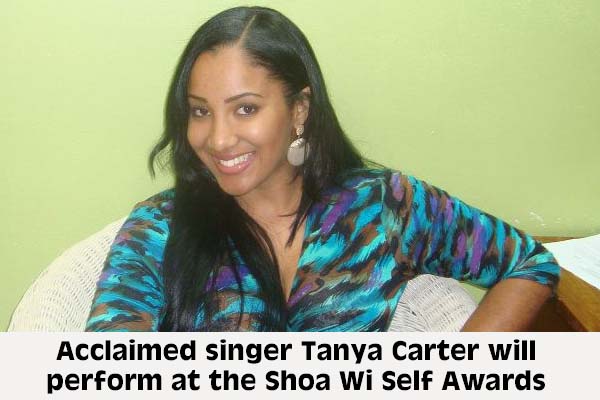 This Saturday, February 1, Belizean musicians, their enthusiasts, and the public in general will have the opportunity to see local artists get rewarded for their hard work and dedication, as KREM Television will be hosting its 2nd Annual “Shoa Wi Self” Awards at the Bliss Center for the Performing Arts in Belize City.

The award show – which starts at 7:00 p.m. – promises to have a full range of entertainment, and will be featuring stellar performances by a variety of popular local artists, such as Tanya Carter, Denise Castillo, TR Shine and Positive Vibez.

Today, Amandala spoke with Evan “Mose” Hyde, KREM Television’s general manager, who told us more about the show and its purpose.

Hyde said, “Basically, it’s our night of looking back at all the performers who excelled [during the past year], or between that time who – in our opinion – deserve to be highlighted. This is our way of honoring these people, and we are pleased that we [KREM TV] are able to recognize the excellence of Belizean creativity.”

He then gave us an overview of the awards that will be issued, and explained the rationale for those awards. Hyde stated, “The top awards are the Male “Shoa Wi Self” award, which is essentially the top male performer. Then, we have the award for the top female performer, and [for those awards] we’re looking for artists who have excelled in the recording studio, in their performance, and just leaving a strong sense of their brand.

“We also have an award for the Band of the Year. We have the Music Video of the Year Award – which is an important award for us at KREM Television because we are in the visual media, and I think we really want to see more videos, and so I think that is why that award is so critical.

“Then, we have an award for the Song of the Year; and we will also have the Wilfred Peters Award, which is an award given out now to the artist that we believe is most industrious – not just a good recording star or performs well on stage – but an artist that is committed to ‘the grind’, such as Berne, for example. We believe that our circumstances here in Belize demand that an artist not just form a song, but that they understand the hustle that goes behind getting the benefits from that song, because if our artists just leave the song on the table, chances are nothing much comes out of it. So, that’s another award that we love.

“We also have the New Artist of the Year award, for the new person that has emerged and is really ‘strutting his/her stuff’.”

Although several types of awards will be issued, another category of award has also been added to the list.

“For the first time, we are awarding someone for their lifetime achievement, and we’re calling it our Legends Award. It’s for someone who has contributed significantly [to the Belizean music industry] over a period of time. We want our awards to be local and also to be different, so we’ve used polished Queen Conch shells placed on a platform. The conch shell has always been one of nature’s works of art and represents the artist’s creativity and hard work. It’s a symbol of converting what’s around you and making it beautiful, and that’s what a true artist does. So, those are some of the highlights of the show, and we’re looking forward to a great night”, said Hyde.

He declared that there is a need for a national award show, and a need for a centralized mechanism that honors artists and celebrates people who have excelled, and said that artists should use the show as an incentive to motivate themselves and keep enhancing their productivity so that they would be eligible to receive an award.

Hyde stated, “I believe that – coming from this organization – it’s a great gesture of saying to our artists that ‘we see you, we hear you, we feel you and we love what you have brought to us over this calendar year’, so I think that’s why we are having the show.”

For those who will be in attendance, Hyde said, “Expect a show where our artists are celebrated. The performances are going to be highlights of what these artists brought to us in 2013, so it’s really a ‘crème de la crème’ thing. I also need to mention that this show is a fundraising effort for KREM Television. Our financial situation has been well-chronicled and we lean on the people who believe in what we do, who use our products, and those who watch us – this is where they get to give back and support. So, through this gesture, if you can, come out and support us; but if you plan on coming, don’t miss the show!”

In order to get tickets for the show, interested persons are encouraged to contact KREM Television at 202-5848 or visit the office at 3304 Partridge Street in Belize City.

Tickets will also be available at the door.