Home Headline Shot in head, fighting for his life
Headline

Shot in head, fighting for his life BELIZE CITY, Thurs. Oct. 26, 2017–Yesterday, Wednesday, a young woman was standing at the right-hand corner of Partridge Street where it joins with Partridge Street Extension, and a man, walking from the direction of the George Price Highway, towards Vernon Street, was approaching her.

A short distance from the girl, a man sat on the trunk of a small blue car. The fourth person in the tragic scene about to be played out was a very small-bodied young man with a low haircut. He was on a small bicycle, traveling from the direction of Vernon Street, towards the George Price Highway.

The man approaching the woman on foot shouted to her, while she was still standing at the corner, “Turn around and don’t look!”

The woman, who did not want to reveal her name, did as the man told her and seconds later, the sound of a single gunshot rang out. The man seated on the trunk of the small blue car fell on the street. He had been shot in the back of the head.

The shooter, the young man on the bicycle, peddled furiously, escaping around the corner of Partridge Street and the George Price Highway. It was almost 4:00 p.m.

The man on the ground would later be identified as Cardinal Andrews, 28, a temporary employee at Belize Water Service and a resident of Burrell Boom. 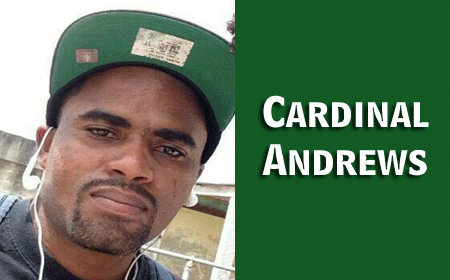 Andrews, the father of one child, was stretched out on the sidewalk briefly. The gunman’s bullet that hit him in the back of his head had exited through his forehead, leaving pieces of bloody tissue on the grass, near the fence of the house of his friend whom he had gone to visit.

In their report, police failed to mention Andrews’s condition; Amandala has learned that he is in a critical condition and is on life support at the Karl Heusner Memorial Hospital’s Intensive Care Unit.

Amandala has also learned that Andrews was only recently employed by Belize Water Services as a temporary laborer, but due to the days of rain, he was off from work.

Andrews’ friend whom he had gone to visit was inside his house when the shooting occurred. Speaking on condition of anonymity, Andrews’ friend told Amandala today that when he looked out of his window, he saw a young man riding on a bicycle, but thought nothing of it until he heard a popping sound and saw people from the neighborhood running toward his house. When he came outside, he saw his friend on the ground.

Around 12:00 p.m. today, Thursday, a Belize Defence Force sergeant rode up to the scene of the shooting. He came on a motorcycle and was fully dressed in his uniform.

When he was told that this was the scene of the shooting, the man walked around, his eyes searching the ground, before he finally said that Andrews was his nephew whom he had helped raise.

When asked to go on record for an interview, the BDF sergeant declined, but continued to speak to the two reporters.
Andrews’ uncle said that he was not a troublesome person, that he was a hardworking young man, a graduate

of Wesley College who was his class’s valedictorian. He said he could not remember exactly when his nephew graduated.

Andrews’ uncle said he had a lot of friends and he tried very hard to support his son, who is about 5 or 6 years old.

“This is a major shock to me. It’s senseless,” Andrews’ uncle said.

Police have not made any arrest yet in connection with this latest act of wanton violence that has left a hardworking man clinging to life.