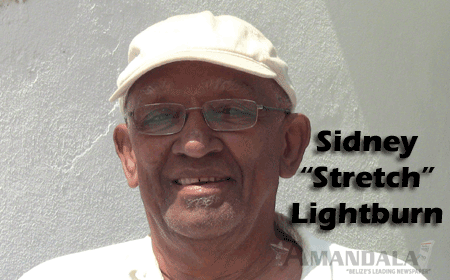 BELIZE CITY, Wed. May 11, 2016–Sidney “Stretch” Lightburn, the older brother of two well-known Belizeans: Clinton “Pulu” Lightburn and the late Ray Lightburn, is living proof that high school dropouts don’t have to be failures in life: they can become productive breadwinners for their families and live comfortably.

The hands of this humble 77-year-old were among the many which helped to build the foundation of many schools across Belize, including his alma mater, St. Ignatius School.

In an exclusive interview with Amandala on Tuesday, May 10, 2016, Lightburn, who has always lived a private life, shared his personal story.

He is the eldest son of Lucille Eusey and Bill Lightburn. Apart from Ray and Pulu, he has a maternal brother, Terroll, who passed some years ago at the age of 50.

Stretch Lightburn was born in Belize City in the middle of the 1939 war, World War II. He was raised in Belize City, where he attended St. Ignatius School and then St. John’s College. He told us that the Jesuits kicked him out after a year—and that was the best thing they ever did for him! When he left high school, he was about 15 years old.

Stretch admits that he never liked to study; he preferred going around listening to stories and he liked to work with his hands. Lightburn began working as a welder with Jimmy and Earl Lindo, the brothers of the attorney Dean Lindo, who had a welding enterprise, and then he moved on to Belize Estate. Subsequently, he went to work for the Jesuits (specifically Bishop Robert L. Hodapp, SJ), who were reconstructing buildings across Belize, especially those wrecked when Hurricane Janet devastated Corozal in September 1955.

He remembers working in Patchakan, Xaibe, San Joaquin, Libertad (at the old sugar cane factory), Xunox, and Yo Chen. They also worked on school buildings in August Pine Ridge, San Lazaro, Trinidad and Guinea Grass in Orange Walk. Next, they moved west to Bullet Tree Falls and Succotz in Cayo, and then south to Barranco in Toledo.

They worked on rehabilitating schools, giving priority to the hurricane-battered North, over a two-year period, Lightburn recalls. Subsequently, he was hired to work with the contractor Dan Milan, an American citizen who also had done some work for the Jesuits in Belize.

Right before Hurricane Hattie struck Belize, he went off for training in New Orleans, where he learned firsthand of the segregationist systems bred by racism. After training, he returned to Belize, where he continued to work in the welding trade.

How well did the job pay in the 1950s? Lightburn said he made a buck an hour, and that, he said, was “pretty good” for him. He said that other men working at Public Works were only making, by contrast, about 40 cents an hour.

They also worked on school buildings in Teakettle and Blackman Eddy in Cayo and Dangriga, Hopkins and Placencia, Stann Creek. He felt accomplished when he helped to build his alma mater’s basketball court and main school buildings after Hattie struck in 1961.

Stretch Lightburn left Belize in 1967, and he has lived most of his adult life in Canada. He returns frequently to Belize to reconnect with family and friends. Among his closest friends is Amandala publisher Evan X Hyde, who considers Lightburn to be a gifted expert in his craft and a brilliant man.

Lightburn told us that the Government needs to pay serious attention to plumbers, carpenters, builders or anyone who works in the trades. He laments over the dismantling of the Belize Technical College, which was the main institution to train Belizeans in the trades at both the high school and the post-secondary levels.

Reflecting on life as it is today, he told us: “it is good right now…”

He has been through his ups and downs, but he tries to maintain a positive outlook through meditation and reading.

In 2009, he lost his dear wife, Diana Day, to cancer. He met Diana while she was working as a nurse in Belize, as a part of the Voluntary Services Overseas (VSO) team. Day was born in Bermuda but had British parentage. Lightburn recalled that the two had had their first date on St. George’s Caye, where some of her ashes were deposited, memorializing their bond with each other and her fondness of the island.

Lightburn spends a lot of time with his children and grandchildren, who all live in Canada. He enjoys taking his grandchildren to the ball games.

Lightburn also loves to read and travel; and he especially loves to play the guitar. He told us that he has a few of them—both acoustic and electric guitars. An hour a day is what this jazz fan puts in to improving his dexterity on the strings.
Notably, he is working towards the album which he wants to be played at his party—the one which he won’t be attending, he said, speaking of his funeral.
As we chatted at a seaside venue of our interview, he drew my attention to the waves washing ashore, a few feet from where we were seated.  The water, he said, ebbs and flows; the waves appear and disappear. That’s us; that is life, he said.