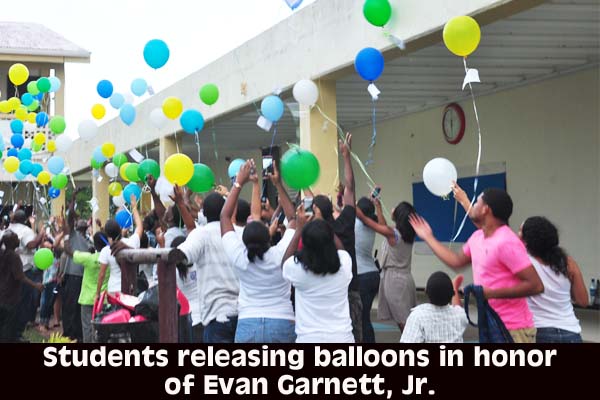 Present for the ceremony were his mother, Jacinta Hyde; father, Evan Garnett, Sr.; stepfather Bernard Wagner and his younger siblings, as well as several other family members who traveled to Belize for his funeral.

Garnett’s young life was cut short in a tragic traffic accident on Saturday, May 10, when he lost control of his car on the Philip Goldson Highway while travelling to his Los Lagos home.

But since his death, a full portrait of his personality has emerged in the consciousness of his family and friends, who remember a happy young man, with an incessant, captivating smile, always showing the willingness to go an extra mile for his friends and family.

Although he was only 19, to most people with whom he came in contact, Garnett was a giant, loaded with very big ideas that he dispensed with kindness and humility to anyone who would lend him a listening ear.

It is only after his sudden death that his immediate families have come to realize how his life has impacted the many people who were fortunate to know him, and move in his circle.

To some people he was a general, to others he was a lion, and to some of his contemporaries at school he was an angel, a special, gifted youth, whose dreams were large projections on the silver screen of a happy life.

A number of his fellow sixth form students gathered on campus and spoke reverently of Evan, who they have never seen angry or sad, they said. His magnetic charm was a light in their world that suddenly went out, leaving only the cherished, happy memories of the youth they now described as an angel.

“From the day that we heard of the tragic accident Evan had, our first reaction as a student body was to do something, because he wasn’t just a classmate to us, he was like a brother,” the SJC sixth form president Anika Smiling told Amandala.

“He had such a big and happy spirit on campus and he impacted all of us,” Smiling added.

Smiling said that the students were all over the social media, and they got flowers and wreaths and turned up at his funeral.

“We know that because of the type of person Evan was, he would want us to do something happy, so we automatically thought of balloons. Everyone donated balloons,” Smiling explained.

At the end of the remembrance ceremony, during which his friends and some of his teachers spoke about their many, happy encounters with him, dozens of helium balloons with messages to him were released into the overcast evening skies