Home Highlights From SJC valedictorian to physicist: The odyssey of Sydney Taegar
Highlights

From SJC valedictorian to physicist: The odyssey of Sydney Taegar 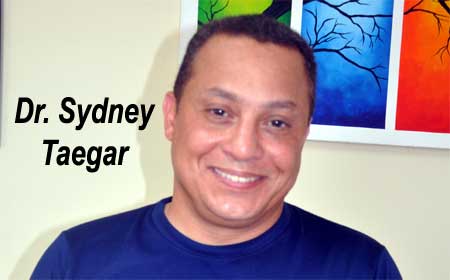 BELIZE CITY, Thurs. July 13, 2017–I have not seen Sydney Taegar for a number of years. When I began visiting his home on Regent Street, around mid-1981, when Sydney was still in primary school, it was for the teachings of his father, the late, great Dr. Leroy Taegar. It was with Dr. Taegar’s guidance that I was able to navigate my way out of the storm that my life had become, after my stance in the Public Service Union strike against the Heads of Agreement in April 1981. The education that I received from Dr. Leroy Taegar was the first substantial training I received as an aspiring writer, and it continued for many years later, when I lived in a kind of exile in New York. Though I had not seen Sydney Taegar in decades, I had heard about his remarkable journey in education and how he had earned a PhD and had become a physicist.

Last week Monday, I walked out of the Amandala newsroom and almost collided into Dr. Sydney Taegar, the man Amandala’s business manager, Jacinta Hyde had told me to do a profile on for our newspaper.

After I took Dr. Taegar in the office to meet with Ms. Hyde, he and I headed up to the office of Kremandala chairman, Evan X Hyde, to do an interview, which turned out to be a phenomenal discussion that lasted almost two hours, covering many grounds, including Taegar’s journey in becoming a physicist, how he met his beautiful, brainy wife in Medellin, Columbia, when he attended a conference there, to his fierce nationalistic stance of wanting to return home and how he avoided becoming a United States citizen until he could not hold out much longer, on account of traveling outside the US with his two children and his wife.

Sydney Taegar was born in Jamaica, where his parents met at the University of the West Indies (UWI). When he was 2 years old, the Taegars moved to Trinidad, where his father and mother, Dr. Leroy Taegar and his wife, Dr. Andrea Taegar, went to complete the university’s residency requirement that would qualify them as medical doctors.

The Taegars touched down in Belize, when Sydney was only 4-years-old. His parents promptly enrolled him at St. Catherine Elementary School, which he attended until he reached Standard 5, then he went on to complete his primary school education at Holy Redeemer Primary School.

At 17-years-old Sydney Taegar completed high school at St. John’s College, where he had enrolled in the school’s science program and finished on top, earning the valedictorian spot for his graduating class of 1985.

Dr. Sydney Taegar recalled to Amandala that he had dreams of going to SJC Sixth Form with his friends. That, however, was not meant to be.

“After graduation, Father Weiss, who was the president of Rockhurst College, in Kansas City, came to me and offered me a scholarship to go and study at Rockhurst. I was not going to take it, because financially we couldn’t afford it. Even with tuition scholarship, we couldn’t afford for me to go to Rockhurst. So, they came back with this plan to offer a low interest loan to cover boarding and lodging. I didn’t know what would happen with going to SJC Sixth Form, so I accepted the scholarship and went to Rockhurst and did the four years,” said Taegar.

“At 17-years-old, did you know what it was that you wanted to study when you finished high school?” I asked.

“Yeah, I wanted to do a PhD in physics at that point in time,” Dr. Taegar replied.

“I discussed it with my dad and he advised me to go straight through, because if you take a break, sometimes you lose your edge. So, I decided to continue on with the PhD,” Taegar went on to explain.

He said that he applied to graduate schools. “There is some back story to this, but I won’t tell you,” he said, noting, “There was some politics involved but I won’t get into that right now.”

He went on to explain that he was accepted into a PhD program at the University of Notre Dame.

“I had chosen to do particle physics, high energy physics. There is a lot of government funding in particle physics. My goal then was to come back to Belize and work in education in Belize, but stay connected to the research in physics,” he said.

“In Belize, we couldn’t afford to invest in particle physics, and I don’t think we should. There is a lot more need to fulfill,” Dr. Taegar stressed.

“Can you break down what is particle physics?” Amandala asked.

“Particle physics is a study of the fundamental nature of the universe. What is everything made up of,” Dr. Taegar answered. “You start off dealing with the elements and the atom. That’s what you call atomic physics. You need a certain ability to probe things at a small scale. Then as you get deeper down into the atom, early in the 1900s we thought there was electron, neutron, proton and that was it. And these are the constituents of the atom. Then you start to probe deeper and get into the nucleus, then you find that these are not fundamental particles, they are made up of things that are smaller still, what we call quarks and neurons. In order to probe smaller and smaller you have to have higher energies. So that is why they build these big machines, like at Fermi Labs or Brookhaven Lab,” Taegar explained. 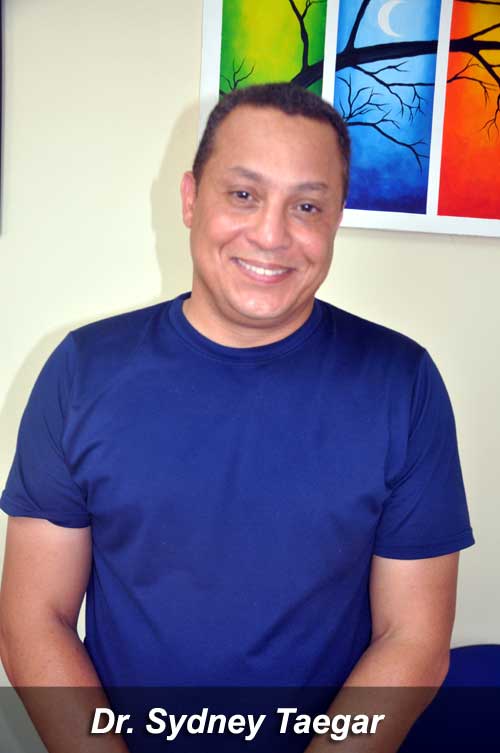 “So you have to accelerate these particles at high energy to create and study these things. The question is there anything smaller than the quarks. Are the quarks themselves particles?” he went on to detail.

Dr. Taegar explained that in physics there are four fundamental forces, which are gravity, electromagnetism, weak force — which is responsible for radioactive decay and hydrogen burning in the sun, and the strong force, which is the force responsible for holding the quarks together. The strong force, the weak force and electromagnetism are described by quantum mechanics. Quantum mechanics was developed in the 20th Century. “The curvature causes things to move and you can talk to Dr. Arlie Petters about this. This is his specialty”, Dr. Taegar said.

Dr. Taegar went on to describe the intellectually enabling environment that both of his parents created for him and his siblings.

“Reading to me is the key to developing intellectually, reading everything, science, literature, history, philosophy. My father taught me a lot. I would say that he is the single most influential person in my life. He instilled in all of us that you could be anything you want to be. Don’t let anybody define you. He exposed us to ideas. My father was the first person who exposed me to science. He used to give me magazines, not just science, literature, history, a very broad exposure. People can be very educated and not be very intelligent and people can be very intelligent and not very educated. So, you can’t confuse the two,” Dr. Taegar emphasized.

“The advantage I had in school was the exposure my parents created for us,” he said.

Dr. Taegar then spoke of how impressed he has been by the work of another Belizean-American physicist, Dr. Arlie Petters.

“In my own study, when I was in physics, because I am not in physics right now, I work in industry. What I did for my PhD is I studied the interaction between quarks and gluons. The theory of the strong force predicts that certain kinds of matter can be formed in the lab. The theory that predicted it had not been studied. If you can measure it, that gives you some evidence that your theory can be proven,” he said.

In 1997, at age 28, Sydney Taegar completed his PhD in High Energy Physics at the University of Notre Dame with his thesis on exotic mesons.

Dr. Taegar explained that after completing his PhD, he went to work at Fermi National Labs, where he did postdoctoral studies. Fermi National Labs is located in Batavia, Illinois, that is located west of Chicago. At that time it housed the largest particle physics machine in the world. “What we studied at Fermi Lab is CP Violation and CP Violation is asymmetry between matter and anti-matter, where a certain kind of meson, called a Keon — the Keon and anti-Keon don’t behave exactly the same”, Dr. Taegar explained. “I spent time at the University of Chicago, because they were part of our experiment. But I worked for the University of Arizona. So I spent time at Fermi Labs, University of Chicago and University of Arizona,” he said.

Amandala asked Dr. Taegar if his studies have had any military application. He replied that his studies are purely academic.

Dr. Taegar said that one time his younger brother Shawn Taegar, the poet, went to visit him at Femi Labs and he showed him the large machines.

“And he asked me what you could do with this (meaning the big physics machine). I said, ‘I have no idea.’ At some point we might understand the nature of the universe. This is just satisfying humanity’s curiosity. So I told him, ‘when you pursue basic knowledge, you don’t know where it’s going to lead you’,” Dr. Taegar said.

Dr. Taegar said he used the example of Michael Faraday’s study of electricity. He didn’t know what it was then, but now we live in a world where we cannot live without electricity.

(To be cont’d in the Tuesday issue)