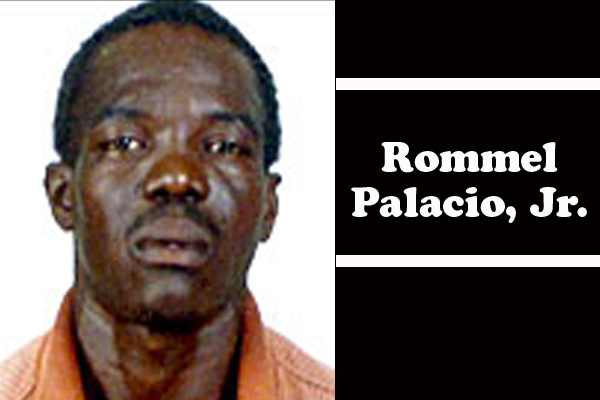 The worst fears of the family of Rommel Palacio, Jr., 34, of the Jane Usher Boulevard area, who was a Supreme Court witness in the murder trial of Emory and Maurice Felix and who has been missing for nearly two months, since December 6, has been confirmed.

Palacio, Jr., was believed to have been kidnapped and killed, and this was confirmed on Friday, February 1, after a decomposed body was found in an area between Miles 11 and 12 on the George Price Highway. The skeletal remains were found in a shallow 2-foot grave that was flooded, among some bushes around 2:00 p.m. on Thursday by three men who were fishing in the area.

The men immediately contacted the police. When police examined the corpse, they found that the legs of the skeleton were missing.

Police called Palacio’s family, who travelled to the area and identified him. His sister, Dannette, said that he was identified by a tattoo and by his wristwatch. She said that Palacio had a gold crown on each of his front teeth, but his two front teeth were missing and his skull had three dents in it.

According to the family, the doctor’s conclusions after initial investigations are that he was shot in his head three times. Other examinations are being carried out on the bones before they are released to the family.

Dannette said that they are devastated, and their grief is beyond words. They are nevertheless relieved that his body was found, and they can now give him a proper burial.

On Thursday, December 6, 2012, Rommel, who was on his day off from work out-district, went to his workplace to pick up his pay, after which he told his coworkers that he was going to the city, and that was the last time he was seen alive.

His sister said that she was later called and informed that Rommel had been kidnapped and killed and buried on the George Price Highway. Searches were conducted to find the body, but to no avail.

However, the hopes of the family were raised when police announced that he was alive, but was in hiding.

Police believe that Palacio was killed to silence him from testifying at the upcoming Supreme Court trial of Emory and Maurice Felix, who are to be retried for the third time for the murder of Mitchum Heredia.

The first trial conducted for the two brothers was held in 2008, and they were found guilty and each given a life sentence, plus another 15 years was handed down to Maurice for the attempted murder of Rommel Palacio, Jr.

Records are that in court, Palacio testified that he saw Maurice and Emory Felix, whom he knew for over 15 years, waiting by a car outside Heredia’s home on T Street in the Port Loyola area at about 6:15 p.m. on April 10, 2006. He said that when Heredia drove into the yard, the two brothers came into the yard and both were armed with firearms.

Palacio told the court that when Emory opened fire on Heredia, he, Palacio, ran between two buildings in the yard, and hid under the verandah of one of them; the brother Maurice, he said, was the one who chased and fired shots at him (Palacio), but he escaped and hid from him.

While hiding under the verandah, Palacio told the court, he saw Emory hold his friend, Mitchum Heredia, at gunpoint. Maurice then joined Emory after he could not find him, Palacio, around the building where he had run to hide.

Palacio said that Maurice confronted Heredia and said, “Buoy, you di play,” and then shot Heredia in the head. Heredia fell onto the passenger seat, because he was still in the driver’s seat in his car. He managed to sit upright again, and that was when both brothers shot him multiple times in his chest, abdomen and head, Palacio told the court.

Palacio testified that when he saw this from where he was hiding, he yelled out at them, and that’s when he heard Emory tell Maurice, “He nuh dead.”

Palacio said that he got up from under the verandah and ran behind the landlord’s house, and Maurice began to chase him again, but he once again managed to escape. The brothers then left the area, and shortly after, the police arrived at the scene and found Heredia dead in his vehicle.

On Father’s Day, Sunday, June 19, 2012, two days prior to the retrial, gunmen went into the Palacio’s home on Jane Usher Boulevard and shot his father, Rommel Palacio, Sr., multiple times as he was coming out of his bedroom.

Police believed that the gunmen went to kill Rommel Palacio, Jr., who was expected to testify again in court against the Felix brothers.

Police have charged Ashton Anderson and Christopher Sosa for the shooting death of Rommel Palacio, Sr., and their murder trial is scheduled to be heard in this session of the Supreme Court.

The Palacio family believed that much more should have been done to protect Rommel Palacio, Jr. as the main witness in a murder trial.

Police, for their part, said that steps have been taken to protect witnesses, but a full witness protection program has still not yet been established. According to police, a full witness protection program would be too expensive, and unsustainable. Some steps now taken include trial without a jury, acceptance of statements witnessed by police and a Justice of the Peace, among other measures.

Police have since declared Palacio’s death a murder and have launched an investigation, but no one has yet been detained.

Assistant Superintendent of Police, Alden Dawson, who is also the officer in charge of Crimes Investigation Branch at the Queen Street Police Station, said during a press interview in January that Palacio’s death would not help the Felix brothers, because his statement was already in the court records.