BELIZE CITY, Mon. June 12, 2017–The race to the Top-4 playoff is coming down to the wire in the Smart 13 & Under Mundialito Football Tournament 2017 at the MCC Grounds, where Week 10 games were held on Saturday, June 3.

In game 1 on Saturday, Brown Bombers registered a big 3-0 win over Belize Elementary Spurs, that propelled the Bombers into playoff contention. Brandon Smith netted 2 and Keyden Bowen got the other goal for Brown Bombers. In game 2, Hattieville Riverside Boys clinched a playoff spot with their 1-nil victory over Reality Youth, on a goal by Oswald Young. Game 3 saw Ladyville Jaguars holding Carlston FC to a 0-0 draw, which effectively dashed the playoff hopes for Carlston. In game 4, Ladyville Rising Stars needed only a draw to secure a playoff berth, and they got it with a 0-0 draw against Heights FC, who remain in the playoff race. Game 5 involved two teams with no chance of making the playoffs, and it was Collet Strikers with their first victory of the season, a 1-nil win over winless Sampson Academy, with a goal from Darnell Jones. And in the final game of the day, game 6 saw City Boys keeping their playoff hopes alive with a 1-0 win over Warriors, courtesy of a goal by Kayia Requena.

With 1 more week of regular season left this coming Saturday, only 2 teams – Hattieville Riverside Boys and Ladyville Rising Stars – are sure of a playoff berth. City Boys and Heights FC are in a strong position, but Brown Bombers and Carlston FC still have an outside chance. The final cut will take place with Week 11 games this Saturday. (See standings below.) 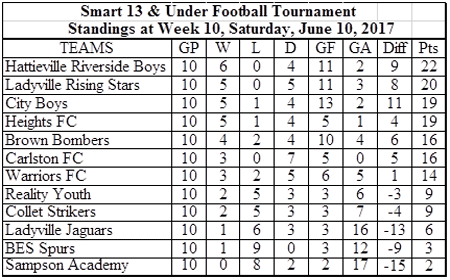