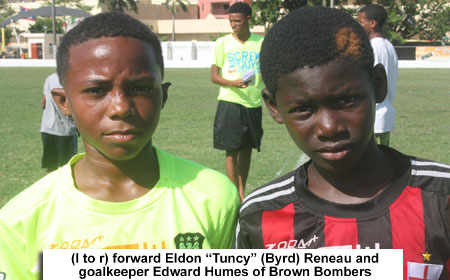 BELIZE CITY, Thurs. July 7, 2016–The Smart 13 & Under Mundialito semifinals took place on Saturday, July 2, at the MCC Grounds in front of dozens of interested parents who turned out to see their youths give their all in the do-or-die knockout semifinals. In the opener, #1 seed City Boys got a goal in second half, courtesy of Ken Galvez, to clip #4 seed Ladyville Rising Stars, 1-nil. And in the nightcap, it was Brown Bombers, 2-nil, over Hattieville Riverside Boys, with both goals coming from Eldon “Tuncy” Byrd Reneau.

There were previous discussions about the possibility of having the championship finals be a best-of-two games series, but it has been decided to keep it at one game only, like in the big international tournaments.

The championship showdown this Sunday will feature two undefeated teams, defending champions Brown Bombers, who conceded only 1 goal in regular season, and City Boys, who gave up 2 goals only. The third place game, which precedes the championship final, has Ladyville Rising Stars going against Hattieville Riverside Boys.