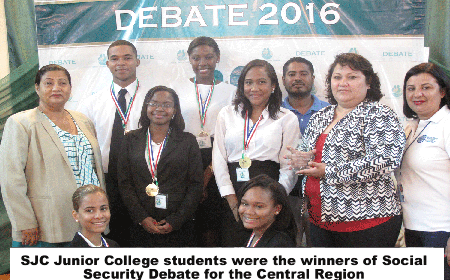 Gayle Ozaeta, Communications Officer for Social Security Board, told Amandala that this is Social Security Board’s second annual debate among junior colleges. Ozaeta said that the idea for the debate came up at Social Security Board’s 34th Anniversary, where they were trying to come up with activities that would engage the community, and at the same time contribute towards national development. The tertiary debate seemed to fulfill those requirements. It proved to be such a big success that it was brought back by popular demand, Ozaeta said.

Ozaeta said that in last year’s competition, St. John’s Junior College was victorious. Ozaeta noted that the competition has grown from last year, which had four institutions participate; this year, as many as ten institutions are participating.

This year’s first debate started in the North between Corozal Junior College and Belize Adventist Junior College, and the topic was, “Media sensationalism is distorting our reality.”

The next competition will see schools from the western region compete, and is scheduled for Wednesday, February 17, at the Sacred Heart Junior College.  There will be two debates on that day, Ozaeta said.

The National Championship is scheduled for April 12, 2016. There will be a scholarship awarded for the most outstanding debater and other prizes.