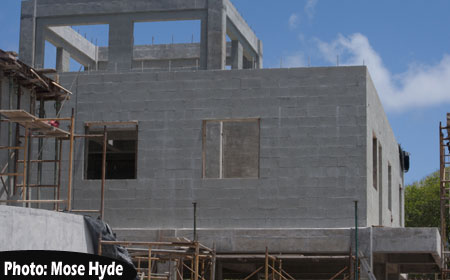 This morning on the KREM WUB, Hyde detailed what he had observed while on a recent vacation outing in the area along with Maheia: Guatemalans building a forward operating base on a Belizean caye, in a project financed by the US Government for the Belize Coast Guard. There are those who have asked whether a competent Belizean company could not have done the works, but beyond that, there are those who contend that the decision poses a national security risk for Belize.

One of those persons is Opposition Leader Francis Fonseca, who mentioned Hyde’s report in Parliament this afternoon, detailing that the Coast Guard contract to build is held by Guatemalans and every single worker is a Guatemalan national. 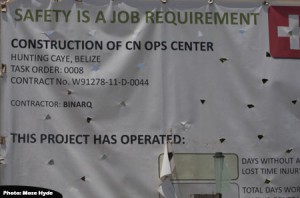 “There must be some national security risk in that taking place,” Fonseca opined.

“Somebody can’t be awake. We can’t all be sleeping over there in the Government. Who is looking after this matter?” Fonseca questioned.

National Security Minister John Saldivar confirmed that the Forward Operating Base (FOB) at Hunting Caye is being built by a Guatemalan company and that he is not comfortable with that fact, but added that the process was controlled by the Americans, who “have their own bidding processes that we must respect…”

“Would we look a gift horse in mouth and give up a much needed forward operating base?” Saldivar questioned.

Prime Minister Dean Barrow, who said that he had no knowledge that a Guatemalan company was building the Hunting Caye FOB, said that giving the contract to Guatemalans was a show of insensitivity.

“There is a degree of insensitivity… in terms of those who are gifting us this forward operating base, man, in contracting a Guatemalan contractor. I have a difficulty with that… In terms of vehicles that we are gifted that are emblazoned with flags of [the] gifting country, I have a difficulty with that. But I guess, ultimately, we need the assistance,” Barrow said.

He added that, “We have to recognize that there is no such thing as a free lunch and there are no gifts without strings of one kind or another.”

Barrow said that he is determined that Belize will pay its own way, because in the spirit of nationalism, Belize “can do without those gifts that come with those strings attached…”

Amandala spoke with a senior Ministry of Works official, who told us that there are qualified Belizean companies which can build such facilities. 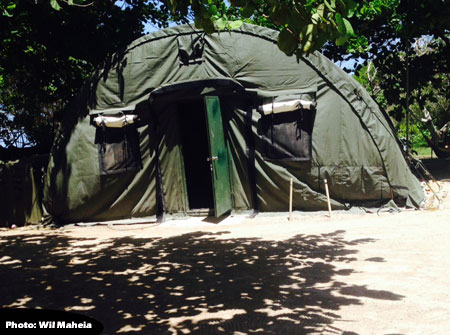 CEO in the Ministry of National Security, Ret’d Colonel George Lovell, told Amandala that while he knew that some of the persons working there are Guatemalans, he was not aware that it was a Guatemalan company which had been contracted to do the work.

According to Lovell, the US Southern Command funds the construction of these buildings and the bidding process is “solely controlled and run by US funding agencies and authorities.”

“They send tenders out for bidding and it is done internationally,” Col. Lovell said, adding that the contract process has “nothing to do with the Government of Belize.”

Lovell disagreed with those who believe that using a Guatemalan company poses a security risk, saying that Belize does a great deal of business with Guatemala, including importing food items from that country.

Amandala was informed by a ranking Coast Guard official that Hunting Caye is located deep in the south on the border with Honduras and Guatemala, 20 miles due east of Punta Gorda and 20 miles from Honduras, but very close to Punta de Manabique, Izabal, Guatemala.

We were told that the building on Hunting Caye will be similar to the US$1.5 million Northern Forward Operation Base inaugurated on San Pedro last November.

The bases are intended to provide security presence to address issues such as narco-trafficking and human trafficking, as well as to provide other law enforcement support and search and rescue assistance.

The Coast Guard official with whom we spoke indicated that the Guatemalan company also built the base at San Pedro.

Lovell said that it may well be the same company, but he thought that it was John Usher (John D. Engineering) who had built the San Pedro facility. While we could not reach Usher himself, we did reach a close relative who told us that Usher did not build the San Pedro post, but a facility at Turneffe.

Of note is that the Sapodilla Cayes, including Hunting Caye, were included in the proposed tri-national ecological park included in the Ramphal-Reichler recommendations tabled under the facilitation process led by the Organization of American States (OAS), to help settle the territorial differendum between Belize and Guatemala.

Honduras would have been the third nation to help administer this tri-national park, along with Belize and Honduras, since it has been noted that Honduras has also alleged ownership of the cayes in question.