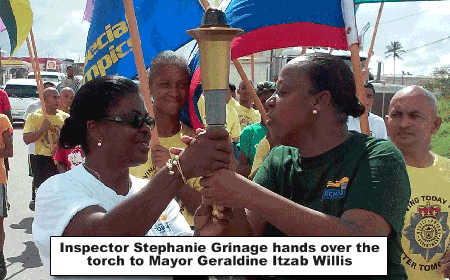 BELMOPAN, Tues. Dec. 1, 2015–Acting Mayor of Belmopan, Retired Senior Superintendent of Police Geraldine Itzab Willis, received the heavily escorted Special Olympics Torch in Belmopan, on the arrival of the torch from Dangriga, at about 11:30 this morning. The torch, which was being carried by Inspector Stephanie Grinage, Deputy Commander of the Belmopan Police Formation, was handed over to Mayor Willis, in front of the Belmopan welcome sign at the junction of Constitution and Forestry Drive. On receiving the torch on behalf of the Belmopan City Council, the city and people of Belmopan, the Mayor began to run, and then walk, with the emblem through the streets of Belmopan.

In an interview with Amandala this morning in Belmopan, Mayor Willis said that the event is in support of people with disabilities and special needs. As the torch is being carried throughout the different districts, funds are being collected to help individuals who have disabilities. She said that the torch was taken from Dangriga to Belmopan, then it will be transported to Cayo and then to Belize City, where on its arrival, the Special Olympics games will commence. 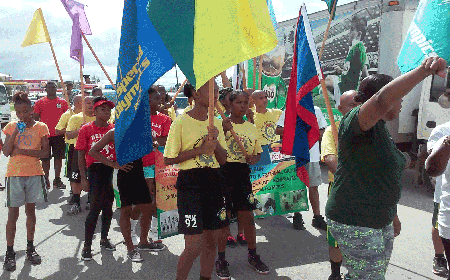 The Mayor said that the Torch Run for the Special Olympics is aimed at highlighting the Special Olympics games and the effort to raise funds to assist people with diverse needs. Law enforcement agencies and other organizations have stepped up to the forefront to aid the effort. Last year their efforts generated $7,000 in funds for the cause and in 2013, about $5,000 was raised.

Mayor Willis said that the public can assist the effort to support the Special Olympics and people with disabilities, in many ways. Individuals can join in and participate in the torch run when it makes its way from one location to the other, and they can make their donations at that time, or they can take their donations to any of the Human Services offices with responsibility for Persons with Disabilities in the various districts. In Belmopan Deputy Mayor Willis can be contacted at the City Hall, and in Belize City the Persons with Disabilities organization is located at the Mental Health Unit Center at the corner of Vernon and Tubruce Streets.

The Mayor said that she and the City of Belmopan support people with disabilities, and call on all municipalities and members of the public to similarly support them. She said that people with special needs just want to be respected and live a normal life like anyone else, and she emphasized that assistance when needed should be given to them. Public buildings and modes of transportation should provide access to such people, as they do for everyone else, and such individuals should be respected and not ridiculed, said Mayor Willis.