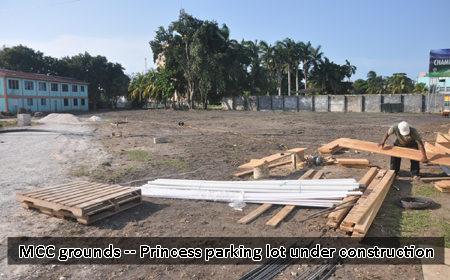 BELIZE CITY, Thurs. Feb 25, 2016–When the Princess Hotel and Casino (originally the Ramada Hotel) was constructed on Newtown Barracks it gobbled up public land that was used by hundreds of Belize City football players for workouts and pickup games. The hotel had a major parking problem from the beginning. The Princess Hotel and Casino has been experiencing a chronic shortage of parking space for its guests and patrons.

In an effort to address its vehicle parking shortcomings the Princess has entered into a lease agreement with the National Sports Council, an agreement which has not been made public, to lease the front portion of the MCC Grounds, specifically to build a parking facility that could accommodate up to 80 cars.

This afternoon recently appointed Sports Director Ritchel Dominguez told Amandala that the Sports Council is partnering with the Princess Casino, who will build the parking lot, and they have agreed to lease the space for $2,500 per month, “because as you know, Sports Council has no money.” Dominguez said the lease is for two years and there is no option in the lease for Princess to buy the 1,692 square meters of MCC’s land.

Asked exactly what the Sports Council will use the money for, Dominguez said the money will be used to upgrade the MCC Grounds and other sporting facilities in Belize City.

In an interview about the parking lot project, Cenk Tanir, the general manger of Princess, told Amandala yesterday, Wednesday, that the idea for building the parking lot was his, and contrary to what Dominguez said, said that the Princess has signed a five-year lease.

The way the MCC/Princess Casino parking lot is supposed to work, is mainly in the nighttime when there are no games or functions at the MCC Grounds. Tanir said if there is a function at the MCC Grounds, they would have to respect that.

The parking lot will be equipped with a security booth which will be manned by the Princess’ security guards when they are using the parking lot. MCC would be responsible for its own security when they have functions.

Tanir said the lease was signed about 5 to 10 days ago, and the Princess will spend around $60,000 to construct the parking lot.

The section of the MCC Grounds where the parking lot is being constructed will not be fenced in, and neither will Princess seek to own the parking lot.

“The contract to build the parking lot is for two weeks, so in two weeks it should be completed,” Tanir said. “The contractor is Ervin Acosta from Corozal.”

Members of the football community were concerned when an ancient, iconic and very large berry tree, which served as a congregation spot for many years for fans attending football games, was suddenly cut down. No information was forthcoming from the Sports Council as to why it was necessary to cut down that particular tree; another berry tree at the rear of the MCC Grounds suffered a similar fate. Dominguez said the trees were infested with bees, so it was necessary to cut them down.

The parking lot inside the MCC Grounds could be a winner both for the MCC Grounds and for the Princess Casino, but until the lease is open for public scrutiny it is safe to employ the old saying: “The devil is in the details,” especially in light of the discrepancies of the duration of the lease – Dominguez told us it is for two years, while Tanir said it is for five years.