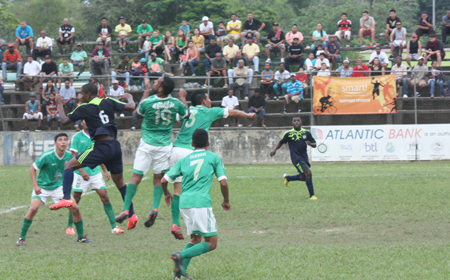 BELIZE CITY–For the past few weeks, repeated reports from various concerned individuals in Cayo have come to this sports desk, to the effect that secret moves are afoot to convert the Norman Broaster Stadium into a parking lot. Yes, football fans, you heard right; a PARKING LOT.

We also thought at first it must be a mistake, or someone running a serious joke. But the reports continued, and this morning it was repeated on the airwaves, on Positive Vibes Radio, by former Minister of Government and Mayor of San Ignacio, who was also a football star in his days, Hon. Hector Silva. Mr. Silva was beside himself in expressing his outrage at this most shocking and heartbreaking idea. Who could conceive of such a plan, and who encouraged it and gave support to it? He vowed that footballers of San Ignacio, and especially the veterans of the Avengers Football Club would never allow it.

Football sacrilege is the thought that comes to our mind. The historic Norman Broaster, home of The Mighty Avengers, how dare anyone even think about it!

This is scary, because it seems to be part of some “master plan” to destroy the past and the memories of the Belizean people by obliterating or disfiguring landmark monuments and structures that help old timers to recognize their old home town, all in the name of progress.

The present Minister of Sports and his Junior Minister of Sports are both nonentities in the world of sports. These gentlemen have absolutely no sports credentials, neither as past athletes or as fans; yet they are at the helm of a portfolio that impacts tremendously on the lives of a generation of young Belizeans. That speaks volumes about the man who appointed them to the post, and the level of importance that he ascribes to sports in the growth and development of our nation.

But there are two other present Ministers of Government who do have major credentials in sports, specifically football.

Minister of Housing Hon. Michael Finnegan has been a football fan of the highest order, and has written many very good articles on football in the Amandala. He is a confessed eternal fan of The Mighty Avengers, and was honored at their first Mighty Avengers Hall of Fame ceremony in 2013. Hon. Finnegan is a Belize City based politician, representing the Mesopotamia area, but it is expected that his would be a voice in Cabinet towards the preservation of the history and sanctity of the Mighty Avengers legacy at the Norman Broaster Stadium.

The other present Minister of Government has impeccable credentials as a former football star of the Verdes Football Club. Hon. Erwin Contreras was the MVP on the Verdes FC national championship team around 1985. He played on the national team and was considered one of the best strikers of the 1980’s. As a former Cayo ‘baller who saw some of his best days at the Norman Broaster Stadium, it is hard to think that Hon. Contreras could sit silently in Cabinet while Norman Broaster was being put on the chopping block.

Another present Minister of Government has been associated with sports too, first basketball, and now as sponsor of defending national champions Belmopan Bandits. No! Hon. John Saldivar, if he is a true lover of “the beautiful game” would never sanction such an atrocity as the demolition of a football legend and landmark.

But how could this nasty rumor have been going around so long? Why hasn’t it stopped?

A lot of progress comes through politics, as the vehicle that selects the people who run the government of our country; but I swear, sometimes it seems that local party politics can be a most destructive force, when it is employed to divide people on issues that should be above party politics. Could it be that some faithful UDP members and politicians are inclined to go along with this idea to destroy Norman Broaster, simply because they don’t want to appear to be going against their party?

At this sports desk, we see this matter as nothing to do with party politics. This is football, football history, and respect for our legends and their legacy. And it is about our youths. They need more football fields, not less.

The Hon. Hector Silva was a national team footballer in his day, before becoming San Ignacio Mayor and a member of the House of Representatives in the PUP government of the 1960’s. I wonder what would have been Don. Hector’s reaction inside the PUP Cabinet, if “Pa George” had one day suggested something as sinister as what we now seem to have with the proposed Norman Broaster destruction. Don Hector’s position now is clear, but would he have been as strong and vocal in his sentiment if he were still in Cabinet, and his football views contrary to his party’s? Of course, many would say that Hon. George Price, man of the people, would never condone such a negative undertaking. Remember, “Save the Barracks?”

From the continuing reports of a “done deal” in regards to the decision for the demolition of the Norman Broaster Stadium, we have to wonder if Hon. Finnegan and Hon. Erwin and Hon. John have stood up for football, or have allowed their football voices to be hushed by party loyalty.

Unfortunately, the track record of our present UDP government is not very good in sports. The Marion Jones Sports Complex has been officially closed to the public since shortly after they came to power in 2008. The MCC Garden in Belize City has been officially closed to the public since June of 2014. In 2009, following Belize’s Silver Medal accomplishment in the COCABA basketball tournament, Prime Minister Dean Barrow stood on the steps of the Belize Civic Center and promised the nation a “state of the art” basketball facility. Since then, the Civic Center has been leveled to the ground, and there is yet nothing in its place. Reliable reports are that in Punta Gorda, their basketball facility was also crushed to dust, and with another National Elite Basketball League tournament scheduled to start next month, they have no venue to play their home games in P.G. Now they are talking about destroying the Norman Broaster Stadium?

Maybe it’s all just a wicked rumor, but I’m sick of hearing it; I prefer to err on the side of caution.

Are you a football player or a fan? Think about it; and don’t let your party color blind you to what you think should be the right way forward. And if you are a proclaimed UDP, and you are against the destruction of the Norman Broaster Stadium, then tell your area rep what’s on your mind before he gets any notions. It is your duty to our youth, to our football, and to our country.