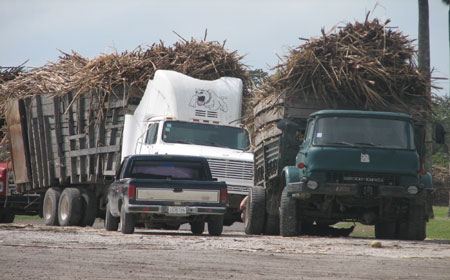 BELIZE CITY, Mon. July 6, 2015–Agriculture Minister Gaspar Vega announced in Parliament last Friday that Tuesday, July 7, would mark the close of the sugar crop for this year; but in a press conference held today in Orange Walk, he announced that the owners of the Belize Sugar Industry had agreed to extend the crop by 5 more days, so that all cane farmers could at least get to deliver at least part of their quota.

Although the July 7 date had been mutually agreed by the major stakeholders in the industry – the farmers and the officials at the Belize Sugar Industries – Gabriel Martinez, chairman of the Sugar Industry Control Board (SICB), told our newspaper Friday that farmers had requested an extension of the season until Wednesday, July 15, because there is still a lot of sugarcane on the ground. However, BSI wanted to stick with the originally agreed date of July 7, because it has a program of major repairs and maintenance work that need to be done on the factory in advance of the new crop year. Martinez said that farmers subsequently made their case to the Ministry of Agriculture.

Even before the crop season’s extension was announced, Agriculture officials were already calling it a record year for sugar production.

Vega had announced that as of 24 June 2015, a total of 130,069 metric tons of sugar had been produced, representing an increase of 32% over the previous year. He added that they were expecting 6,000 more tons to be produced by the time the season closes.

Vega said that it is clear that even with all the challenges which have faced the sector—including a delay in the start of this current crop, they are still succeeding.

Originally, the crop year was to have begun on November 24, 2014, and it was first pushed back to December 8, Vega said, “because of people with their own agenda,” causing a further delay. It was not until January 28 that the crop year began, 49 days late, said Vega.

Vega said that the factory has been milling 7,481 tons of cane per day. If you multiply that by 49 days, it means that they would have been able to mill 366,582 tons more, had the season started on time.

“It is clear that the farmers and the entire industry [are] having a huge increase in the production of sugar. We won’t be able to deliver as much cane but by far we are producing much more sugar,” Vega said.

There are roughly 5,400 active farmers operating in the sector, Martinez told us. He said that the recent formation of new associations in the industry has actually resulted in healthy competition, since the various groups are aspiring to bring in the best quality of cane, in order to fetch better prices.

If the quality is maintained, said Martinez, farmers will receive $66.69 per ton of sugar cane delivered to the factory. Weather conditions, including moderate rains, have been favorable for quality production, he said.