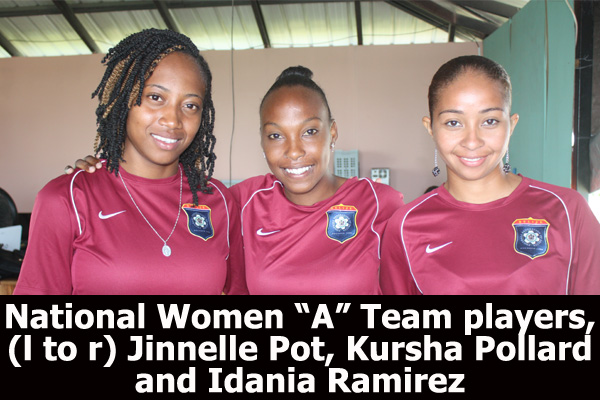 Support our Belize National Women “A” Team footballers, preparing for UNCAF eliminations May 19-25 in Guatemala

Fresh off a 2-1 victory over the Quintana Roo champs in their recent international friendly in Chetumal on April 27, the Belize National Women “A” Team embarks on a another weekend of matches, leaving Belize on Friday for Playa Del Carmen, Quintana Roo, where they will participate in a Mundo Maya tournament, returning to Belize on Sunday. The team is preparing for the UNCAF (Central American) eliminations in Guatemala on May 19-25, which is an official Qualifier tournament for the CONCACAF Women Gold Cup, to be held later in Cancun, Mexico.

Three members of the National Women “A” Team were guests on this morning’s Krem WUB, along with their team manager, Mrs. Carol Palma, and coach, Kent Gabourel. Also accompanying the delegation was FFB Public Relations Officer Luis Pena, who exhorted football fans countrywide and the business community, in particular, to give their full support, financial and otherwise, to the team.

There are two aspects of national team participation in international competition that we know, from personal experience, go a long way in boosting the morale and performance on the field of our athletes – those are financial security for the trip (no street side solicitation of donations, when they should be concentrating on training) and appropriate and uniform attire for team members while travelling. This we can, and this we MUST do for our Belizean young women who are going out to represent the Jewel against the best of Central America. (Hello, out there!)

Big up Yoni Rosado of Cave Tubing Dot Com and Douglas Thompson of Black Orchid Resort for leading the way in giving support to the National Women “A” Team.

Time off from work and school should be a no-brainer, and WUB host Mose Hyde, who is also Chairman of the FFB National Team Committee, made a special plea, with a not so subtle promise of publicity, to those who remained reluctant to give our girls the needed support.

This Belize National Women “A” Team is comprised of players from across the length and breadth of the Jewel. For example, of the 3 players who appeared on the WUB this morning, forward player Kursha Pollard is from Belize City, has a 2-year-old daughter and is an employee at the Call Center (formerly Choice Call Solutions) at Boom Junction; goalkeeper Idania Ramirez hails from Jalacte Village in the Toledo District, but is now married with a 3-year-old daughter and living in Camalote Village; and midfielder Jinnelle Pot comes out of Maskall Village in northern Belize District, and is presently a 1st year Business Science student on a University of Belize sports scholarship.

We hope to have the complete team roster along with a team photo in our next issue.