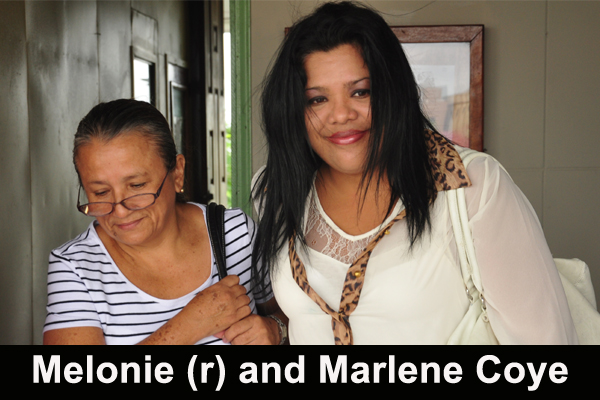 Melonie and Marlene Coye walked out of the Supreme Court of Justice Sonya Young with broad smiles lighting up their faces, as they edged their way past reporters without saying much, following their court victory this morning, giving them access to millions of dollars that the state had frozen during their protracted money laundering case, which began on December 31, 2008, when they were first arrested.

For the Coye family, accused of money laundering by the Financial Intelligence Unit, it has been a legal roller coaster ride of ups and downs, victory and defeat, imprisonment, freedom, and death, before today’s court victory.

Melonie Coye told reporters, “We just want it to be finally over.”

She added, “It’s been hard, it’s been rough, it’s been a long journey and I am very sick this week with the diabetes. I am not feeling too well, but I’m hanging in there.”

At the time they were exonerated by the Court of Appeal, the court also ordered that the family’s bank accounts be unfrozen. But it was not to be, not just yet.

A Panamanian company, Internet Experts SA, managed to secure an interim injunction from the Supreme Court which blocked their access to the moneys that were in their bank accounts.

In their claim, Internet Experts said the Coyes owed them US$4.8 million.

Attorney Lisa Shoman managed to secure the interim injunction blocking the Coyes from access to the money in the accounts as soon as the court had given them the go ahead to access their accounts.

Following submissions from Shoman and the Coyes’ attorney, Arthur Saldivar, Justice Young ruled in favor of the Coyes and refused to continue to keep the funds frozen.

In delivering her judgment, Justice Young described Internet Experts SA’s application as a fishing expedition in which the court was being asked to continue to lock up the Coye’s accounts, while the company searched for its missing money.

Justice Young dismissed the injunction to keep the funds frozen.

After the judgment was delivered, Coye’s attorney, Arthur Saldivar, told reporters outside the court that he is very pleased “the Honorable Justice was able to look into the matter and bring back the decision that she has brought.”

Saldivar said it was a very detailed and a very comprehensive exposure of what the law requires in these instances.

The $1.557 million that the Belize Central Bank has been holding as exhibit since the beginning of the case must now be handed over, in addition to all the family’s bank accounts that had been frozen throughout the money laundering proceedings.