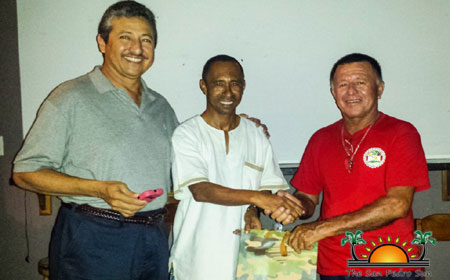 SAN PEDRO–Superintendent Luis Castellanos, Commander of the San Pedro Police, was honored for his hard work and dedication at a ceremony on Friday, in San Pedro, and was presented with a certificate of appreciation by Mayor Danny Guerrero on behalf of the San Pedro Town Council, and Hon. Manuel Heredia, San Pedro’s area representative.

The event was held at Fido’s Courtyard.

OC Castellanos will leave the island town and will proceed on studies overseas, and Friday was his last day with the San Pedro police.

Mayor Danny Guerrero said that Superintendent Castellanos has been a hard worker; that his method of operation was not complained about, and he put people first.

Superintendent Castellanos, for his part, encouraged his fellow police officers to continue working hard to improve the community, stressing that crime cannot be stopped overnight, but that they must continue to work hard with the community. Castellanos commented that crime is not only a police issue, but also a community issue, and a united effort by all stakeholders would make the island safer for both the residents and visitors. At the end of the ceremony, a party was held in his honor,

According to the San Pedro Sun, OC Castellanos took over command of the San Pedro Police in January, 14, 2013. He restarted the community policing efforts, as well as the San Pedro Youth Cadet Corp.

Superintendent Castellanos worked well with Amandala and the media, and we join in wishing him success in his endeavors.