A surging armed group in Guatemala? 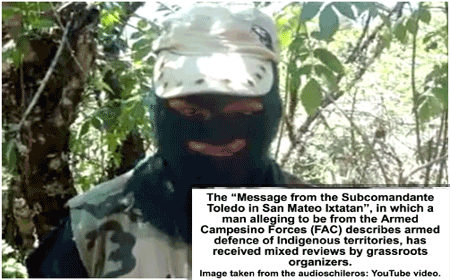 BELIZE CITY, Thurs. Apr. 14, 2016–In the previous edition of the Amandala, we featured a story that had been aired on Krem about the alleged surging of an armed group in western Guatemala. Reports from Huehuetenango, Guatemala tell of videos circulating, allegedly made by a group of armed campesinos, or peasant farmers, under the self-described banner of Fuerzas Armadas Campesinas (FAC- Armed Campesino Forces). The FAC has received much attention (20,000+ YouTube views of a video attributed to them) although they have reportedly not carried out a single armed action. The videos of masked men holding guns have sparked debate. Some grassroots organizers have warned that the video may be a false production as part of the state’s strategy to criminalize community leaders and militarize the region.

In the most recent video, which is the second reportedly produced by this group, a man wearing a black cloth covering his face speaks to the camera, introducing himself as Subcomandante (Subcommander) Toledo. The message he explains in Spanish during the 5 minutes, is to encourage other peasant farmers to join in “the struggle”. He emphasizes a call against “national and transnational companies” that are involved in projects including hydroelectric dams, mining, planting of palm oil and other projects. Toledo warns to the “campesinado” — other peasant farmers: “the objective of the businesses is to destroy us, to destroy our rivers, to destroy our natural riches that come from our Mayan ancestors”. In turning attention to corporate interests he says: “We want to give a message to the national and transnational businesses: Leave, at the earliest moment possible, because we are tired of the abuses that you carry out against the peasant farmers in the area of Ixquisís! It is for this reason that we make a call to all of the peasant farmers from the north of Ixtatan to unite forces to build up our numbers as members of the armed forces FAC. We want to make a call to the business Promotion of Hydroelectric Development, PDH, [Promocion de Desarollo Hidrico]: Cancel your work before there could be more actions! We are fed up with the abuses that you carry out against the Maya Q’anjobal, Maya Chuj and the different ethnic groups of our Mayan ancestors.”

Officials have been quick to respond to the video, including the Guatemalan presidential spokesperson, Heinz Hiemann, who has consistently ignored the constant death threats against and murders of organizers. Hiemann told the conservative newspaper Prensa Libre that the group is being investigated by the government: “The self-description of this group of campesinos [peasant farmers] as an armed group is worrying, it undermines national security.”

Others have criticized the accents of those in the videos and other details that they say give cause to question the group’s authenticity. Suspicions have also been raised that the FAC video might be a creation by the right-wing as a tool to justify targeting and arbitrarily detaining leaders and to justify increasing the already large presence of so-called security forces in the region. They explain that many current Indigenous organizations that share a similar message have categorically rejected armed resistance. The use of Facebook, which is an easy target for surveillance, and covered faces are atypical in the Indigenous movement against megaprojects.

Realizadores Tzik’in, a network of community-based media producers, warns that the video may be a form of media manipulation. They write that: “It is very convenient for the hydroelectric projects, the military interests and the business people of the Franja Transversal del Norte (FTN)… this is a new stage of repression of the northern communities, the state and the businesses first created divisions in the community, defamation, attempts [on people’s lives], arbitrary detention, kidnapping, judicial processes, political imprisonment and now they are attempting to instil the idea of the existence of an armed insurgent group that does not have the characteristics of being one.”

The videos have sparked controversy in our neighbouring country where for 36 years grassroots guerrilla fighters, mostly Indigenous and campesino, organized across the length and breadth of Guatemala to protect stolen territories and communities facing genocide by the US-backed military elite. At a time when Guatemalan ex-military officials are being tried for rape and massacres of unarmed civilians, most of whom were Indigenous, and at a time when extractivist practices continue unabated by the government and multinationals, many fear that a return to times before the 1996 Peace Accords is on the horizon. During the civil war over 200,000 people were killed, tortured, raped and disappeared — most of them were poor Mayan. Many hope for an end to the failure of the Guatemalan state to recognize international law and human rights, which would also halt multinational business projects.

When two Maya Mam organizers from Huehuetenango visited Kremandala in January they recalled how just two decades ago the Peace Accords brought an end to the regular practice of the Guatemalan military during the genocide: torturing people to death, scalping family members and throwing babies against rocks to their death. They say that much, but not enough, has changed — but with the memories still fresh, they firmly support resistance without arms.

At this point, there are more answers than questions about the group and the video, and credible grassroots groups have expressed mixed reviews. Ultimately, the public conversation about Indigenous autonomy and environmentalism that has flourished in Guatemala is what matters. It is less about sensationalizing resistance and more about the daily struggle of the poor. But the video has catapulted into mainstream spaces, including social media, and has brought focus on the real dangers faced by the Indigenous communities. The fact that the Guatemalan President Morales’ spokesperson quickly comments on “FAC” and has offered scant comment on the role of multinationals, the police and the military in real criminal activity, is the real controversy.

According to the Network in Solidarity with the People of Guatemala (NISIGUA), Huehuetenango communities are facing the expansion of a mega-highway planned to cut through northern Guatemala from Mexico to the Caribbean, as well as three hydroelectric dams (Cambalam of Hidro Santa Cruz in Barillas, Hidro San Luis of CM5 in Santa Eulalia and Ixquisis of the PDH, S.A., in San Mateo Ixtatán) and other possible mining projects in the area. Despite the rejection of these projects by the communities, they have continued and some leaders including Rigoberto Juárez and Domingo Baltazar, two Q’anjob’al community leaders, have been unfairly jailed and others have been assassinated.

Irma Alicia Velasquez Nimatuj (elPeriodico), an international invited speaker and the first Indigenous Mayan Guatemalan woman to receive a PhD in social sciences, commented in an opinion piece that it is not only in Huehuetenango, but across Guatemala where this is taking place, naming the concerns that human rights defenders have about murder and impunity against organizers: “They are tired of their demands not being heard, that their inquiries are being ignored by the [state] institutions with the aggravation that their leaders end up assassinated, imprisoned or entangled in slow and expensive judicial processes. They are fed up that they are not being respected as human beings who feel, who have rights and their own proposals for development. They are tired of using the [Guatemalan] Constitution, of appealing to the [1996] Peace Accords, to the Accords about Identity and Rights of the Indigenous Peoples, to the Municipal Code and to the Council of Urban and Rural Development Law. Now, they demand that the Convention 169 [of the ILO] and the international frameworks be respected; and in the case of not achieving these, it will not be strange for them to commit themselves to autonomy as the only way to not die.”

What does this “FAC” group say?
According to the video statements by the self-described FAC group, they are not attacking the government but resisting the destructive projects being carried out by corporations. They say that these industries are a real danger to natural resources and Indigenous farmers. They also say that they are “willing to die” to defend their communities and Indigenous territories and warn that if the exploitation by big local and foreign businesses continues “more actions” will be carried out.

The FAC is said to be based out of Huehuetenango, an eastern district of Guatemala that borders Mexico. The district saw some of the worst massacres in the country during the civil war, and today has continued to mobilize for peace. Huehuetenango has carried out community-led referenda known as consultas communitarias in at least 28 of the 32 municipalities. This may be the most important reason for diverting attention from the singular FAC group: there are almost one million voters who have voiced their resistance to these megaprojects for years, despite the utter failure of the Guatemalan government to respond accordingly.

The referenda or consultations are a nation-wide effort led by Indigenous rural Guatemalans to vote on megaprojects that are being carried out or are being proposed in their territories. Despite threats and violence from the elite and police and military forces, across the country 1 million Guatemalan people have voted, or about 1 out of every 15 Guatemalans. Every consultation has resulted in an overwhelming “NO” vote to projects such as hydroelectric dams, mining, agribusiness and deforestation. Even so, the Guatemalan government has ignored their votes and international denouncements by human rights organizations, and the projects, including Canadian gold mines, EU-financed sugar monoculture, USA fruit plantations and other North American and European foreign investment projects continue to poison rivers, remove entire mountains, divert ancient rivers, and turn farmland into barren fields.

In an exclusive Amandala interview last month, when asked why Belizeans should trust that any referenda would be supported by the Guatemalan government considering the failure to recognize the consultas communitarias by their own people, the Foreign Minister of Guatemala Carlos Raul Morales denied the value of these Indigenous-led referenda, saying that, “there is no way to be sure who is leading the consultation process,” minimizing the incredible people-led process that has taken place in Guatemala despite the threats and violence. Morales assured that Guatemala would respect an ICJ referendum because it would be legally binding. Many have argued that consultas comunitarias hold legitimacy under Convention 169 of the ILO.