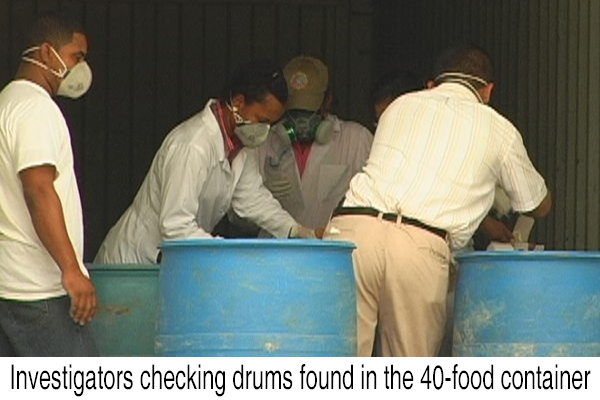 Eight men, 7 of them from Corozal and one from Cayo, were all charged with customs and criminal offences and were arraigned today in the San Ignacio Magistrate’s Court after a Police Quick Response team discovered them in possession of what are believed to be chemicals used in the manufacture of the highly addictive and deadly drug called methamphetamine, more commonly known as “crystal meth.”

San Ignacio police said that around 12:30 p.m. on Monday, they were on patrol in the Bullet Tree area when they spotted a 40-foot container attached to a towhead truck that was parked on the side of the Calla Creek Road, just past the Bullet Tree Police Substation. They subsequently searched the large blue container, which was loaded with only ten 50-gallon blue barrels. Those barrels, however, contained suspicious chemicals, which are supposedly chemical precursors. The barrels were un-declared, un-documented and likely smuggled across from Guatemala.

Shortly after, a team from the Forensic Department arrived and attempted to determine specifically what type of chemicals were inside the drums by immediately taking samples, but the smell of the chemicals in the closed container was unbearable, so they decided to discontinue the tests at the time.

Today, notwithstanding pending tests on the other drums, the eight men who were allegedly involved in the operation were charged for the reckless acquisition, possession and control of un-customed goods by Customs officials, and for being in possession of a controlled drug, namely hydrochloric acid, which can only be imported with a government permit.

The charges are also for one of the other drums, which contained ammonium hydroxide, while the results for the other eight barrels found inside the 40-foot container are still not back as yet. So far, only two of those drums have been tested: one contained hydrochloric acid and the other contained ammonium hydroxide – both used in the manufacture of methamphetamine. The other eight are suspected to be phenyl-acetic acid, which is another frequently used precursor for crystal meth; however, this is yet to be confirmed.

In court, the men were reportedly advised that the ammonium hydroxide was valued at $325, and so the Customs Department would have forfeited $2,000 for the un-cleared goods, which is approximately triple the market value of the products.

One of the attorneys for the defendants reportedly said that the men were granted bail for the possession of controlled drug charge because there is no evidence before the court that would suggest that they could convert the chemicals to crystal meth.

There have been several instances in the past whereby similar precursors have been shipped from Asia to the Port of Belize; however, they were intercepted by Customs authorities. Chemical precursors, such as pseudo-ephedrine, phenyl-acetic acid and even methylamine, are used in the production of methamphetamines, also known as crystal meth, which has become widely popular, especially in the United States.

Apparently, smugglers have now resorted to different methods of importation, since the possible precursor chemicals were brought in not by sea, but by land, most likely, through an illegal, unregulated border crossing with Guatemala near the western village of Bullet Tree.

It is believed that the container entered the country illegally, bypassing the border entry point.

Police suspect that the men were in the process of ferrying more barrels across from Guatemala through the illegal crossing, and may have kept the container basically under the watch of village police, since the police station is about a mile from an unregulated border crossing.