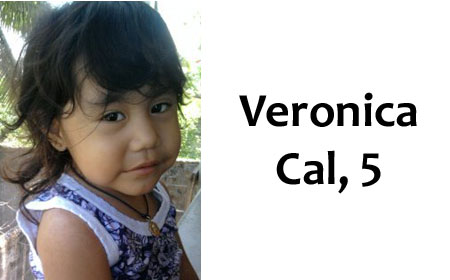 BELIZE CITY, Thurs. May 7, 2015–Despite assurances from officials of the Ministry of Health, concerns are being raised regarding the recent death of a young student of Stella Maris School in Belize City who was reportedly diagnosed with “presumptive meningitis” prior to her death.

Amandala understands that the child, Veronica Cal, 5, of Hunter’s Lane in Belize City, died this past Monday, May 4, while receiving treatment at the Karl Heusner Memorial Hospital (KHMH), three days after being stricken with the condition, which, we are told, quickly deteriorated and led to her passing.

Her father, Mario Cal, told the media today that it started with vomiting, which led to a fever, and later to other complications.

He told reporters that last Thursday, April 30, Veronica started to vomit, but he did not believe that the condition was serious at the time, so the family did not panic.

The next day, Friday, which was a holiday, she developed a fever, and by Saturday, the vomiting had intensified to the point where his daughter was not able to digest any type of food.

That is when they took her to the Cleopatra White Health Center, where she was given medication for the vomiting and fever, which, according to the father, kept getting worse despite the medication that was offered by the clinic.

This past Monday, Cal’s parents decided to take her to the KHMH, where she was admitted in a critical condition and later died despite the efforts of doctors to save her.

In a phone interview with News 5 today, Interim Head of the Epidemiology Unit at the Ministry of Health, Marvin Manzanero, discussed the situation and assured the public that it was under control because necessary precautions have been put in place since yesterday, and added that public health officials had visited the school this morning and had also met with Veronica Cal’s family members.

He explained that the presumptive diagnosis that was given to the family when the patient was admitted was that she contracted meningococcal meningitis, which, he said, is an infection of a section of the outermost layer of the brain that can have multiple causes, such as a virus, certain parasites, any bacteria, or even illnesses like tuberculosis and pneumonia.

According to Manzanero, the fact that the preliminary lab results that were given to his department yesterday, Wednesday, pointed to this diagnosis – meningococcal meningitis – is no reason to panic.

“Meningococcal bacteria could have been the reason the condition was developed, but because it is caused by that bacteria does not mean that you are going to put everybody on quarantine”, he continued.

He mentioned that meningococcal meningitis has simple causes, and anyone can be stricken by it.

“If you develop a flu that is not treated properly, if you are a diabetic, if you are a young child, [or even] older people [are susceptible] and mortality depends on conditions associated with the patient”, he emphasized.

Manzanero said that at this time, he is not able to say what exactly caused Cal to die, but indicated that she had been suffering from “three different infections” when she was admitted to the hospital, after which she went on a downward spiral, which, he informed, is “not the norm”.

He told the media that the infectious bacteria was found in the fluid of the child’s brain, and that an autopsy will be done tomorrow to determine the precise cause of death.

We understand that officials from the Health Department went to the school and took water samples today as part of their investigation into how the suspected case of meningitis was caused.

We were told that the department was scheduled to issue a press release on the matter today, but up to press time tonight, we had not received that release.

We also understand that officials from the Ministry of Education met to discuss the pressing matter today, but promised to provide a press release regarding their findings tomorrow pending the results of a postmortem exam on Veronica Cal’s body.

In the meantime, a concerned parent who said that he has a child that attends Stella Maris School contacted Amandala tonight to mention that there may be more to the story than authorities are saying.

The parent told us that he is worried about the situation because, according to him, there was another male student from the school who was about 9 years old who also died of similar conditions sometime last week.

The parent, who wished to have his name withheld, said that the boy is from the Boots Crescent area of Belize City where he (the parent) lives, and that the boy was in the same class that Veronica Cal was in.

Furthermore, he alleged that two young siblings of that boy may now be infected with the condition and noted that Health Department personnel visited the area recently to monitor the two children.

We were reliably notified that the students of Stella Maris have been informed that they are not to attend classes until Monday of next week.

We will keep following this story.