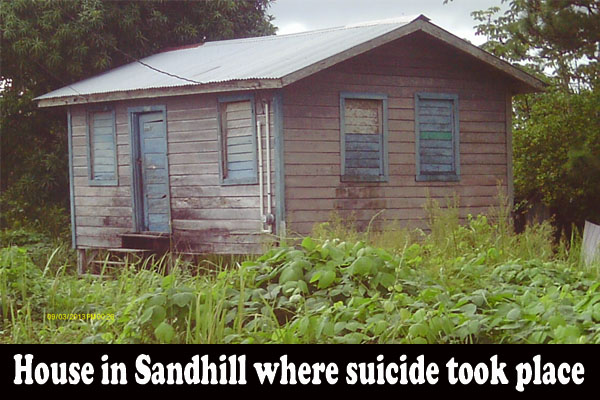 A resident of Sandhill was found dead in his home after apparently taking his own life. However, Ladyville Police stated that they visited Sandhill, located at Mile 19 ¼ on the Philip Goldson Highway, at about 8:18 p.m. on Monday, September 2, 2013 after receiving reports of an apparent homicide.

Upon reaching the scene, police reported that they saw the body of Emir Bailey, 29, hanging motionless with what appeared to be an electrical cable tied around his neck. The cable was tied to a wooden beam in the bedroom of the residence that was shared by Bailey and his common-law wife, 18-year-old Kayla Augustine.

Police said that a cement block was also observed next to Bailey’s feet. His body was taken down and transported to the Karl Heusner Memorial Hospital (KHMH), where he was pronounced dead at 11:25 later that night.

According to a relative, the couple was engaged in a disagreement prior to the incident. The relative told Amandala that last night she was in her home when Bailey’s common-law wife, Augustine, came there hollering and screaming. When the relative asked her what had happened, Augustine said that her boyfriend had hanged himself.

The relative said that she was startled upon hearing the news, then Augustine told her that she and Bailey had been quarrelling earlier in the evening, but it was “nothing major.”

The relative told us that after the quarrel, Bailey had allegedly threatened to kill himself, but was advised not to do so by his girlfriend. She then said that Augustine told her that she stepped outside of the room for a while, and later heard a commotion, and when she went to investigate, she noticed that Bailey had indeed hanged himself.

The relative also mentioned that Bailey had threatened to commit suicide before.

Another relative told Amandala that she doesn’t know what drove Bailey to do such a thing, and finds the incident “shocking.” She described him as a quiet person, and said that the couple, who have been together for 2 years, have a 5-month-old baby.

While the incident may be interpreted as a suicide, police were awaiting the results of the post-mortem to discern whether or not Bailey may have been killed. Those results were provided via a police press release that was sent after the post-mortem examination was conducted between the hours of 1:30 p.m. and 4:00 p.m. today.

Dr. Mario Estradabran, who did the autopsy, certified the cause of Bailey’s death to be asphyxia due to hanging. Police have since continued their investigations.